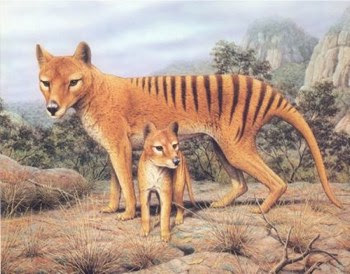 The film team behind The Hunter shot a series of interviews with witnesses - no doubt a nice little addition to the 'special features' of the DVD when it comes out!

“Whether there is still a tiger out there is still hotly debated.  It remains a current and mysterious topic that continues to divide popular opinion, especially in Tasmania. This mystery is key to the journey of Willem Dafoe’s character in THE HUNTER,” director Daniel Nettheim said.

THE HUNTER will be released in Australia on October 6, 2011.

And while we're on a roll, this gem from NITV follows the same lines...

So is the Tasmanian Tiger still out there?
Posted by RR at 09:00