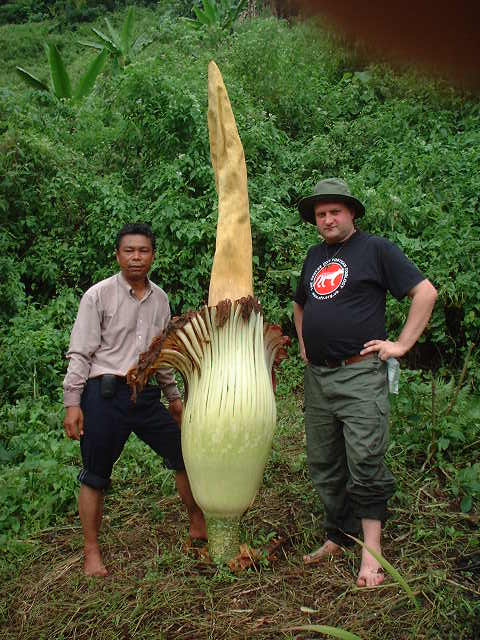 As we embark on the CFZ Sumatra Expedition, we have lined up a series of themed posts during our absence.

Pictured above is the CFZ's Richard Freeman (right) with a freaky-looking and rarely blooming Sumatran plant known as the Titan Arum, or ‘corpse flower’, which grows to the amazing height of 2-3 feet.

As well as being the world’s biggest flowering plant, it is also the smelliest as it goes into the final phase of its six-year life when it gives off a pungent odour, reminiscent of rotting flesh.

The plant is a distant relative of the ‘lords and ladies’, a British lily. It is distinguished by its yellowy, fleshy spike known as a spadix. This is wrapped in a single cream leaf which, when opened, reveals a rich crimson inside.

When the plant is ready to attract pollinators, the spike heats up and gives off the smell which disgusts humans but is very attractive to insects. Hence it's nickname 'corpse flower'. It then develops the fruit which attracts birds.

Recounting his 2004 trip to Sumatra, Richard wrote this rather poetic description of the beastly bloom for the Fortean Times:

"By a remarkable stroke of luck, a specimen of the Titan arum, the world’s largest flower (below), and one that blossoms only once every 10 years, was blooming nearby – an unmissable opportunity.

The village backed onto an area called "the garden", cultivated land that is used for growing crops but which merges with the jungle seamlessly and is, in some areas, very overgrown. Due to the garden’s more open nature, one usually encounters more wildlife here than in the jungle proper, and this is where the T. arum was to be found.

It lived up to its name; it is truly the Godzilla of flowers, looking like some strange surrealist sculpture or something made by the BBC special effects department. It stood 7ft (2m) tall, the elephant’s foot of a stem widening into a barrel-sized green bowl. This in turn flared out into the petal, which looked like nothing so much as a Spanish Flamenco dancer’s red dress. Finally, a phallic stamen of bright yellow stabbed upwards from within the petal’s folds.

The scent of the T. arum is said to be like rotting flesh; it is pollinated by flies attracted to what they assume is a cadaver. We could detect no such smell around our flower – but close by the fresh carcass of a bearded pig was stealing its thunder."
Posted by RR at 20:29