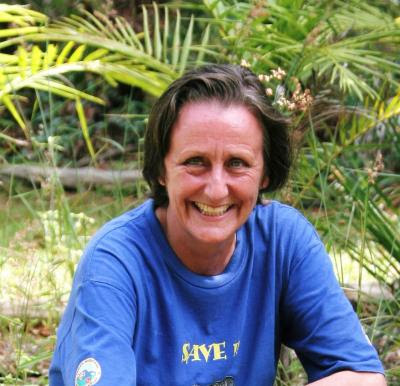 The CFZ's Richard Freeman is one of Britain’s few professional cryptozoologists, and has worked at the Centre For Fortean Zoology since 1996. He is currently writing a book about the Orang Pendek.
This is an interview Richard did with Debbie Martyr, an ex-pat British journalist who now works in tiger conservation. Debbie has seen the Orang Pendek firsthand and started up the website www.orangpendek.com to document her research into the mystery beast. The interview originally appeared in a 2004 edition of the Fortean Times.


~~~
RICHARD FREEMAN: Tell me how you first became interested in Orang-Pendek?

DEBBIE MARTYR: I was travelling in Sumatra as a journalist in 1989. I was climbing Mount Kerinci and heard of a legendary animal that I thought would add a bit of colour to my travel piece. Then I started meeting people who claimed to have seen something. At that stage I didn’t believe or not believe; I was trained as a journalist, which is a respectable profession, so I took a look into it.

RF: Can you tell me about the first time you saw orang-pendek?

DM: I saw it in the middle of September; I had been out here four months. At that time I was 90 per cent certain that there was something here, that it wasn’t just traditional stories. I thought it would be an orang-utan and that it would move like an orang-utan, not bipedally like a man. I had my own preconception of what the animal would look like if I did see it, and I had been throwing away reports of the animal on the basis of colour that didn’t fit what I thought the animal would look like. When I saw it, I saw an animal that didn’t look like anything in any of the books I had read, films I had seen, or zoos I had visited. It did indeed walk rather like a person – and that was a shock.

DM: A relatively small, immensely strong, non-human primate. But it was very gracile, that was the odd thing. So if you looked at the animal you might say that it resembled a siamang or an agile gibbon on steroids! It doesn’t look like an orang-utan. Their proportions are very different. It’s built like a boxer, with immense upper body strength. But why an animal with immense upper body strength should be lumbering around on the ground, I don’t know. It makes no sense at all.

It was a gorgeous colour, moving bipedally and trying to avoid being seen. I knew there was something in the vicinity, because the action of birds and primates in the area meant that there was obviously something moving around. So I sent a guide around as far as I could to where the disturbance was. Whatever was concealed in the undergrowth would try to avoid my guide and move away in front of him. I was concealed, looking down over a small shallow valley. We didn’t know what we were going to see. It could have been a bear, it could have been a tiger, it could have been a golden cat, or anything. Instead, a bipedal, non-human primate walked down the path ahead. It was concentrating so hard on avoiding my guide it didn’t look towards me. I had a camera in my hand at the time but I dropped it, I was so shocked. It was something so new my synapses froze up for a minute trying to identify something I hadn’t seen before.

RF: You have seen it a couple of times since. Could you tell me about those sightings?

DM: I saw it again about three weeks later. Again, it was on Mount Tuju and, again, I had a camera in my hand but I froze, because I didn’t know what I was seeing. It had frozen on the trail because it had heard us coming. All I could see was that something across the valley had changed. I looked through a pair of binoculars. Something didn’t look quite right in the landscape. By the time I trained on the area the animal had gone. Those were the only times I could have got a photo of it. I have seen it since, but fleetingly. Once you have seen an animal you can recognise it. If you have seen a rhino you can recognise a bit of a rhino.

RF: Can you tell me a bit about your theory of why orang-pendek walks bipedally?

DM: Everyone has pet theories. I think the only thing that makes sense is the massive volcanic event about 50,000 years ago that created what is now Lake Toba up in northern Sumatra. It created a [geographical and biological] divide. You get the Malayan tapir down here but not up there. You get the Thomas’s leaf monkey up there but not down here. In recent geological history it was the biggest volcanic event. It was absolutely immense and would have caused massive habitat destruction right across Sumatra and into Malaysia. All I can think is that surviving animals down here would have had to become terrestrial. They would have found themselves with very few trees.

RF: But 50,000 years is a very short time for something to change so radically.

DM: What you could suggest is that 50,000 years would be sufficient time for something to change its muscles. Maybe there wouldn’t be much skeletal change, there would be some but not a lot. But the main change would be in the muscles. An adaptable animal that is being forced to walk erect. Gibbons can walk erect so perhaps another, larger ape could become bipedal. Speciation – that’s what makes the most sense.

RF: What do you think of reports of other bipedal apes in Asia?

DM: I don’t believe in the abominable snowman. My father was in Tibet and saw what he was told were yeti tracks, but they turned out to be bear footprints. They are just too big. I think three-metre-tall (10ft) apes are too big. Maybe there has been exaggeration through fear. I don’t believe in things like bigfoot. The yeren in China might exist. Orang-utans lived in China in the Pleistocene. It could be speciation in the orang-utan. The forests of Assam might be a good place to look as well.
Posted by RR at 16:08