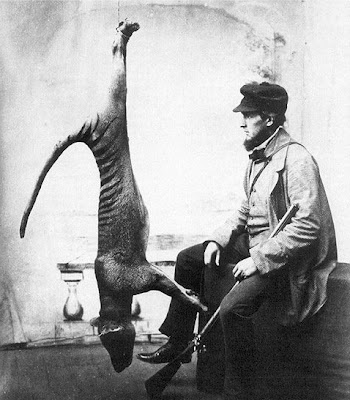 Over at the Environment Institute blog hosted by the University of Adelaide, guest blogger and postdoctoral fellow Thomas Prowse discusses the use of software models to explore the roots of extinction:

"At a time of accelerated species loss, it is concerning that past extinctions are still so poorly understood. Australia has a woeful record of mammal extinctions, having lost 18 mammal species over the last 200 years. The specific causes of these extinctions are unclear and, in particular, the relative importance of introduced predators (foxes, cats), herbivores (sheep, cattle) and infectious disease, is hotly debated. The popular ‘disease hypothesis’ attributes most extinctions to epidemics initiating from European domestic animals and livestock. This hypothesis lacks hard evidence but human history provides a bleak analogue – just think of the indigenous Americans who lost up to 95 % of their population to disease epidemics after European contact.

Given many Australian mammal populations are currently declining (even without extensive habitat loss), it is critically important to investigate the reasons for these historical extinctions. We in the Global Ecology Laboratory are collaborating with an international team of conservation scientists to develop new software for studying extinction processes and predicting the extinction risk of threatened species. A key collaborator is Dr Robert Lacy (Chicago Zoological Society) who developed Vortex, a software package designed for population viability analysis (PVA) that has been used extensively over the last two decades for conservation assessment and planning. Our goal is to develop a flexible framework to allow multiple Vortex models to be integrated within a single ‘metamodel’, thereby extending the applicability of PVA techniques to incorporate complex multi-species systems. We have recently completed the first case study using this approach.

The extinction of the carnivorous, marsupial thylacine (aka “Tasmanian Tiger”) proved an ideal case study because, while difficult to explain by single factors, we know that the species was confronted with multiple extinction drivers. Prior to European settlement in 1803, thylacines were broadly distributed throughout most of Tasmania. In 1886, however, the Tasmanian government legislated a bounty payment for thylacines, paying bounties for 2 184 thylacine carcasses until the scheme’s termination in 1909. Only a handful of animals were located after the bounty was lifted and, in 1933, the last known thylacine was captured from the wild.

It has been argued repeatedly that European impacts (i.e., habitat loss, bounty hunting) were not sufficiently severe to account for the thylacine extinction. Furthermore, government bounty records indicate a sudden reduction in thylacine kills after 1905 which, it has been argued, is evidence of a rapid population decline most likely caused by disease. Therefore, the International Union for the Conservation of Nature (IUCN) lists disease as one cause of the thylacine extinction.

However, bounty hunting clearly interacted with many other European-imposed pressures that together might account for the thylacine’s extinction, without the need to invoke disease. The negative impact of European settlers on the thylacine’s prey base (kangaroos and wallabies) was probably very important. European settlers hunted kangaroos and wallabies for food and the fur trade and also introduced non-native herbivores (particularly sheep) to their favourite habitats.

To investigate the causes of the thylacine extinction, we linked multiple Vortex models dynamically to develop a stable predator-herbivore-vegetation metamodel representing the pre-European food web. We then perturbed this metamodel to simulate the diverse impacts of Europeans, including habitat modification, bounty hunting, prey harvesting, and the rapid growth of the sheep population that competed with kangaroos and wallabies for food. We were able to simulate the thylacine extinction over a wide range of plausible initial population sizes (without needing to invoke disease) and also recreated the rapid, early 1900s population decline. The metamodel identified competition between introduced sheep and the thylacine’s prey as a critical extinction driver.

We concluded that the thylacine’s demise can be accounted by known negative European impacts. The interacting effects of these impacts were powerful enough that, even without a disease epidemic, European activities committed this species to extinction. Our continuing work to develop a platform for complex systems models will be of great use for the study of historical extinctions and current conservation problems involving complex, interacting stressors."
Posted by RR at 14:31