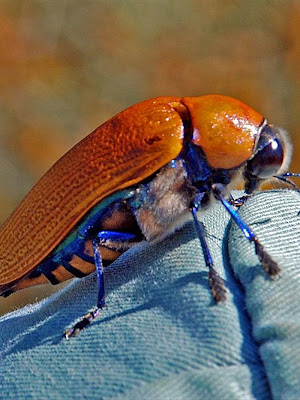 Researchers who discovered that a species of beetle makes love to a beer bottle are among the winners at this year's IgNobel Prizes.
The IgNobels are awarded each year by the Harvard-based Annals of Improbable Research as a light-hearted counterpart to the Nobel Prizes, which will be awarded next week. The prizes are intended to celebrate the unusual, honour the imaginative, and spur people's interest in science, medicine and technology.
Entomologists Dr Darryl Gwynne from University of Toronto Mississauga and Dr David Rentz, an adjunct professor at James Cook University in Queensland, received the biology prize for their 1983 study that showed male jewel beetles copulate with empty, discarded beer stubbies. Their study was published in the Australian Journal of Entomology.
Confused by the colour and reflection of the small bumps on the bottom of a glass beer bottle, male Julodimorpha bakervelli beetles mounted the bottles and attempted to copulate with them.
"Some of the more attractive bottles had corpses of several beetles around them," says Rentz.
The researchers say that apart from polluting the environment, discarded bottles are a potential threat to the beetles' mating system. The researchers wrote to the local brewery, and while they received no response, the bottles were modified to remove the dimples.
Posted by RR at 22:10