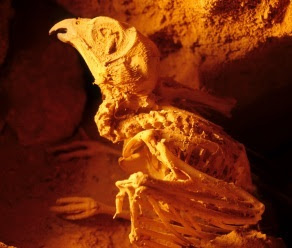 A treasure trove of fossils up to a million years old has been found in three caves under the Nullarbor.

Palaeontologists returned last month from their fifth expedition to Last Tree Cave, Flightstar and Leaena's Breath, on the WA side of the Nullarbor Plain, where about 100,000 bones were collected during the past two field trips.

"There were a lot of complete skeletons of megafauna species just sort of lying on the cave floors," he said.

One of the most impressive finds was an almost complete skeleton of a Thylacoleo carnifex, or marsupial lion - a prehistoric animal that was the size of a leopard, built like a bear and able to stand up like a kangaroo. It had huge claws and the most powerful bite of any known mammal.

WA Museum documentary director Clay Bryce, who has been involved in the project since its inception, described the caves as a treasure trove of extraordinary fossil material.

"From one skeleton we suddenly went to 11 Thylacoleo skeletons, tree kangaroos, koalas, Thylacines, giant wombats, untold numbers of birds, giant kangaroos, Procoptodons, smaller species of kangaroo, horned wallabies, the list goes on and on," he said.

Dr Prideaux said the caves had acted as an animal trap, catching animals that fell through the entrance and birds that could not find their way out.

On the most recent expedition researchers rescued two live birds that had become disoriented in the caves.

Dr Prideaux said at least eight confirmed new species had been found in the caves and that was likely to rise to 15 to 20 new species as more bones were analysed.

The research was part-funded by National Geographic.
Posted by RR at 14:15