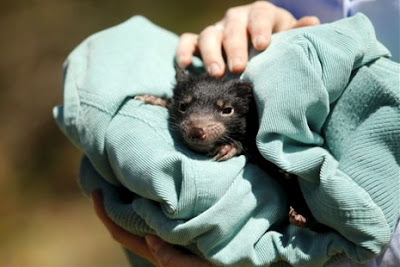 More than 1000 Tasmanian devils are expected to live in the Barrington Tops in 10 years time.

The rapidly growing population is the result of the Devil Ark breeding program, which was opened yesterday. The program, established on 500 hectares of land donated by the Packer family, aims to establish a population free of the contagious devil facial tumour disease.

The Barrington Tops was chosen for the project because it closely mimics conditions in the devils' native environment. After years of planning, the Devil Ark program began this year with the release of 43 devils in January.

The population is expected to have doubled by December.
Posted by RR at 14:12