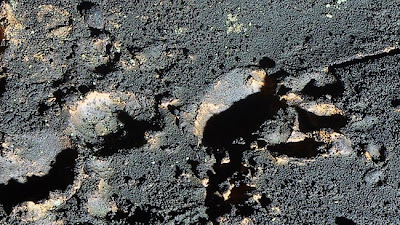 Scientists have discovered the footprints of an extinct tiger in soft mud in Augusta's Jewel Cave.

Cave workers accidentally made the "extremely rare" find while taking water samples in a remote area of the cave.

For the first time, images of the new Tasmanian tiger or thylacine footprints plus never-before-seen photographs of prints discovered nearly 20 years ago will be on display at the caves in Augusta from this Saturday.

Striped like a tiger and with powerful jaws that opened up to an unusual 120 degrees, Tasmanian tigers were the size of a kelpie dog and one of only two marsupials  the other a water opossum  with pouches in both sexes.

The man who made the discovery, caver and environment project manager for Augusta Margaret River Tourism Association Lindsay Hatcher said finding any type of footprint in a cave is extremely rare.

"They were found in soft mud, and if we were to stand on it now it would disintegrate.

The species hunted kangaroos across mainland Australia from about four million years ago until the 20th century, when hunting and the introduction of disease and dingos has been blamed for its demise.

Mr Hatcher said scientists are reluctant to take castings of the new find for fear of ruining the prints.

The last  thylacine in captivity died on September 7, 1936.