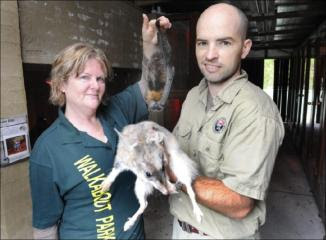 Australia Walkabout Wildlife Park is doing its bit when it comes to the fight to save Australia’s endangered and threatened flora and fauna.

It is reported there are 444 species of reptiles, frogs, fish, mammals, birds and other animals listed under the Environmental Protection and Biodiversity Act.

Some of Australia’s much loved animals are facing the possibility of heading in the same direction of the extinct Tasmanian Tiger, including the Northern hairy-nosed wombat, southern cassowary, grey headed flying fox, bilby and koala.

According to Australia Walkabout Wildlife Park general manager, Tassin Barnard there are many reasons why so many native species face the possibility of extinction.

“One of the big factors threatening our native wildlife is loss of habitat through the construction of houses and roads,” Ms Barnard said. “I’m not saying don’t build more roads and homes because we need them but maybe we need to think about where we build them and how we are going about it, as not only are the new roads and homes wiping out animals homes it’s also leading to a lack of food sources.”

Other problems according to Ms Barnard are interbreeding, feral animals and a lack of information.

“Information and education are the key because there is a lot of misinformation out there, but the more people learn about these animals it might prompt them to come up with other ideas to help save them,” Ms Barnard said.
Posted by RR at 08:00