Red Dog - the legend of Karratha 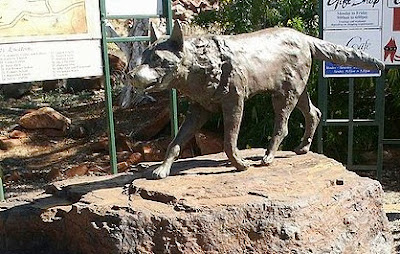 We just couldn't pass up recommending this latest Australian cinematic offering - a film inspired by a book written about a real dog who won the hearts of everyone who crossed his path.

His name was Red Dog.

Red Dog (1971 – November 20, 1979) was a Kelpie/Cattle dog cross which was well-known for his travels through Western Australia's Pilbara region. There is a statue in his memory in Dampier, which is one of the towns to which he often returned.

Red Dog is believed to have been born in the town of Paraburdoo in 1971 and had a variety of names to those who knew him, including: Bluey, Tally Ho, and Dog of the Northwest. Tally Ho was his first name, given to him by a man called Colonel Cummings, who is believed to have been his first owner and the one who brought him to Dampier. The nickname 'Red Dog' has been attributed to the red dirt of the Pilbara Region. His second owner was John Stazzonelli, a truck driver with Hamersley Iron, whose work allowed Red to travel as far as Perth, Broome, Roebourne, Point Samson and Port Hedland.

Following John's death in 1975, Red spent a lot of time traveling on his own although he was taken in by many members of the community and a veterinarian who treated him. Red was made a member of the Dampier Salts Sport and Social Club and the Transport Union. He was also given a bank account with Wales Bank, which is said to have used him as a mascot and sales tool with the slogan, "If Red banks at the Wales, then you can too".

Although he had many friends, it is believed that his death in 1979 was caused by deliberate strychnine poisoning. Red is buried in an unmarked grave somewhere between Dampier and Karratha.

Soon after Red's death, Australian Author Nancy Gillespie wrote and compiled anecdotes and poetry written by several people of the Pilbara region for her book, Red Dog, as did Beverly Duckett in her 1993 book, Red Dog : the Pilbara wanderer.

Red Dog's story and statue have caught the attention of a number of people passing through Dampier including British author Louis de Bernières, who was inspired to write a book loosely based on Red's legend, Red Dog.

A feature film about Red Dog, based on de Bernières' novel, has been made in Australia, and is now playing at cinemas everywhere.