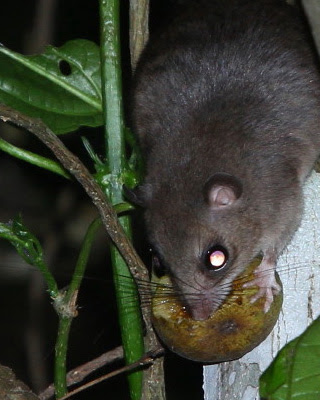 A sighting of one of Australia's rarest native rats in suburban Cairns has set mammal experts in a spin. The prehensile tailed-rat, also known as the Pogonomys, has been photographed climbing a tree at Centenary Lakes at Edge Hill.

The rare rat, which is characterised by its distinctive monkey-like tail, was only discovered in Australia in 1974, was dragged into a lodge by a cat at Lake Barrine on the Atherton Tableland.

Cairns wildlife enthusiast Brian Venables, who had been spotlighting with friend Hidetoshi Kudo at the lakes two weeks ago, said his friend took a photo of it immediately after spying it up a tree.

The rat has a tail which curls upwards to grip twigs when climbing, and also allowing it to hang from its tail. Little is known about the habits and distribution of the animal, with most of them found killed by cats.

The nocturnal rats have found in Kuranda, and also reported from James Cook University's Cairns campus and the Daintree lowlands.
Posted by RR at 14:00