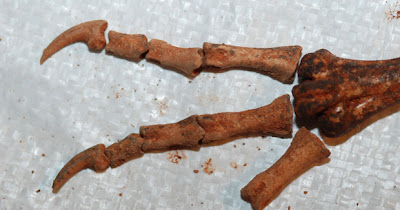 Fossilised remains of a prehistoric bird, possibly a wedge-tailed eagle, have been found in a cave on the Nullarbor Plain. The bird is more than 780,000 years old!
The discovery was made during a Flinders University-led expedition involving the WA Museum.
Flinders’ palaeontologist, Dr Gavin Prideaux said the almost complete skeleton was unearthed amid dozens of bird bones in a cave known as Leaena’s Breath Cave – about 70 kilometres on the WA side of the border with South Australia.
“We’ve only ever found one partial eagle fossil before so, given how complete this specimen is, it would be an exciting discovery,” Dr Prideaux said.
“We’ll need to get the specimen back to Flinders University to determine whether it is, indeed, an eagle and, if so, whether it is the same species as the modern wedge-tailed eagle or something new,” he said. 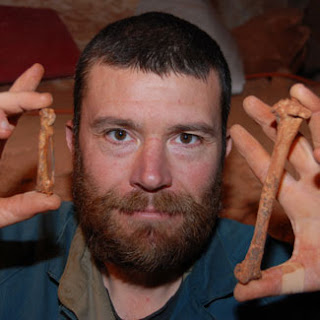 “It may be new given that it is at least 780,000 years old and probably much older. Surrounding these larger bones are literally hundreds of songbird bones, a situation mirrored through the rest of the deposit.
“This cave has been acting as a bird death trap for at least a million years, which is just one thing that makes this one of the most interesting and unique palaeontological sites in Australia.”
The discovery was made on only the second day of the field trip which is a collaboration between Flinders University and the Western Australian Museum.
Video and blogs of the expedition can be found at:
http://www.museum.wa.gov.au/cave/videos
http://www.flinders.edu.au/cave/
http://www.museum.wa.gov.au/cave/bloggers/gavin-prideaux