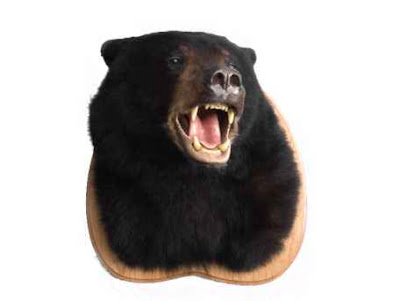 A treasure trove of exotic animal remains has been found hidden inside a Sydney home.

Lion, orangutan and bear skulls, a mounted bear head, a full skin and head of an Alaskan wolf and ivory products were among more than 400 animal parts seized in a raid on the home in North Parramatta.

Federal investigators who executed a search warrant at the property in Iron Street say it was one of the largest wildlife seizures in Australian history.

A variety of exotic weapons were also seized at the property, including two walking canes with swords hidden inside them.

A 41-year-old man was charged with firearms offences and is due to appear in Parramatta Local Court on August 31.

Officers from the federal Department of Sustainability and Environment and NSW police raided the home on August 3 but the department released details of its finds only on Thursday.

The raid followed a lengthy investigation into the alleged illegal importation of animal remains.
Posted by RR at 07:27