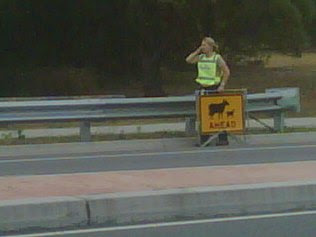 Authorities deny they have run out of 'i-deers' after four feral deer that caused peak hour chaos on the Gold Coast this morning eluded capture.

The deer ran amok through Southport this morning, leaping busy roads and high backyard fences as they led their would-be captors and a media posse on a merry chase.

Gold Coast City Council rangers armed with rifles and tranquiliser guns tried to round up the rogue creatures but were outsmarted and outpaced.

"One of our officers is a crack shot but couldn't get within cooee of them,'' said Geoff Irwin, who heads the council's animal control section.

Mr Irwin said the fact the deer were in a built-up area, close to Southport State High, meant shooting them was too dangerous.

He said even using a tranquiliser gun or net gun was difficult because they could only be fired at close range, and the deer moved too quickly.

Mr Irwin said it was hoped the deer would calm down later today so they could be captured.

The public has been asked to report sightings and warning signs have gone up on roads.

The four deer are believed to be part of a feral herd in the Nerang State Forest, about 10km from Southport, and are thought to have fled a buck deer.
Posted by RR at 06:08