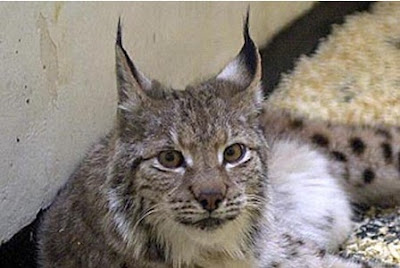 Last week UK news site This is Devon covered an intriguing story that was also the subject of a talk at this year's Weird Weekend: the discovery of a 100-year-old specimen in a museum basement. We'll be featuring the video of the talk by Max Blake and Dr Darren Naish on this blog, but in the meantime here's the story:

The evidence includes the body of a lynx that was shot in mid-Devon just over a century ago, and leopard hairs and plaster-cast paw prints found recently near Woolfardisworthy that have been positively identified by independent experts.

Jonathan Downes, director of CFZ, told the Western Morning News: “We showed the lynx to various people last night and Dr Darren Naish and student Max Blake will be explaining its story this weekend. It is absolutely fascinating and it proves big cats are not a new thing.

“Max discovered the lynx in the archives of Bristol Museum and realised the importance of it,” said Mr Downes. “The animal was shot over 100 years ago in mid-Devon and that’s important because it proves there have been exotic cats in British countryside for many years.

“This animal has provenance – we have the date, time and the name of the person who presented it to the museum. This is a breakthrough,” he added saying that the stuffed body was of an animal smaller than a Euro-Asian lynx. 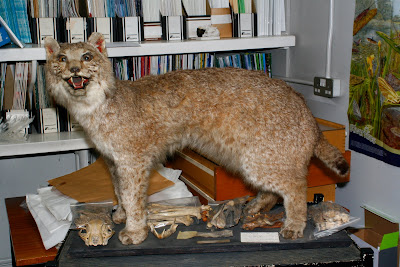 “It is within size the range normally equated with a Canadian lynx,” said Mr Downes. “So is it a Canadian lynx that was in captivity and escaped? Or it might be something even more interesting? There were no zoos in Devon that it could have escaped from at the time it was shot.

“The Devonshire naturalist HG Hurrell – a respected columnist for the Western Morning News – suggested that lynx were living in parts of Westcountry 50 years ago – as did Professor Bernard Heuvalmann, a noted academic. We know there were lynx living in Britain 1500 years ago, but could some have survived?”

Mr Downes said the next move was to have DNA extracted from the animal’s teeth or bone in an attempt to answer the riddle. CFZ also revealed that hairs found in woods near Woolfardisworthy had been positively identified as those of a leopard.

“We had them DNA tested by Durham University and they confirmed they were leopard. This is proof that there was, as of last summer, at least one leopard apparently wild in the woodlands of North Devon,” said Mr Downes.

“Local sightings have gone back an awful long time which implies there’s a population here. A few years ago a local farmer contacted us saying something had attacked one of his sheep – we saw the carcase and it had been killed in a fashion characteristic of a leopard.”

Given the subject matter and that the name of his organisation’s conference is “The Weird Weekend”, did Mr Downes fear that some people might question the seriousness of the evidence?

“We are not making outrageous claims,” he told the WMN. “We are not talking about sabre-toothed tigers or Loch Ness Monsters. That’s all nonsense. We are simply saying an animal can live here and adapt to the natural conditions.”
Posted by RR at 20:19