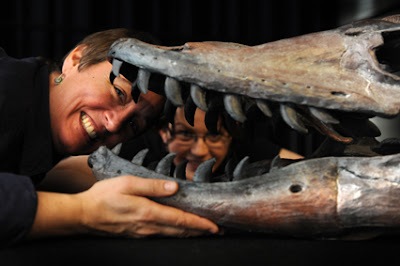 A skeleton of prehistoric reptile Megalania was on display at the recent Sci-Spy! event held at Monash University Gippsland to celebrate National Science Week in the region.

Megalania was a six-metre long lizard similar to the komodo dragon which roamed central Australia about 40,000 years ago, which scientists believed claimed victims as an ambush predator.

Monash Science Centre scientist Dr Corrie Williams described Megalania as “big, impressive and heavy” and said the lizard had a tendency to provoke a response in children.

In addition to Megalania, the skeleton of the prehistoric bird Bullockornis will also be on display, which was about 2.5 metres tall and weighed about 500 kilograms.