Clever dolphins teach each other to fish with shells 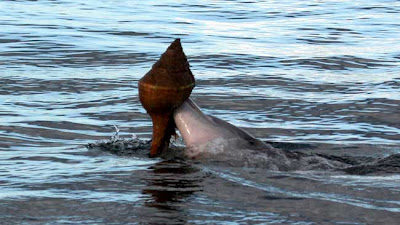 Murdoch University researchers believe a recently documented method of fishing may be spreading throughout a population of Western Australia's dolphins.
Indo-Pacific bottlenose dolphins (Tursiops aduncus) in Shark Bay were photographed engaging in ‘conching’ in 2007 and 2009.
The dolphins would trap small fish in large conch shells with their rostrums (beaks), then bring the shells to the surface and shake them, causing the water to drain out and the fish to fall into their mouths.
Murdoch Cetacean Research Unit Researcher Simon Allen says this previously rarely witnessed phenomenon might be on the increase, suggesting that the technique is spreading.
“In the last four months alone, the research team have seen and photographed the behaviour no less than six times, possibly even seven.
“If – and that is a big if – we are witnessing the horizontal spread of this behaviour, then I would assume that it spreads by an associate of a ‘conching’ dolphin closely observing the behaviour and then imitating it,” Mr Allen said.
“It is a tantalising possibility that this behaviour could spread before our very eyes – over a field season or two – and that we could track that spread.”