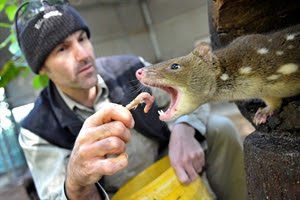 The zoo’s three female tasmanian devils – Prada, Gnasher and Fang – are carrying young in their pouch and marketing manager David Cobbold said the arrivals were big news for the zoo.

Peel Zoo’s tasmanian devils are kept quarantined to keep them safe from the Devil Facial Tumour Disease (DFTD), which has devastated the Tasmanian population.

DFTD restricts the devil’s ability to eat, with some areas reporting a 95 per cent decline in population.

Peel Zoo owner Narelle McPherson said the zoo’s population could expand by up to 20 young if each of the expectant devils and quolls produced four young.
Posted by RR at 08:20