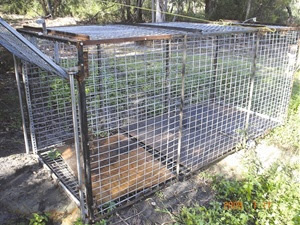 THERE are panther sightings all the time, but people are too scared of ridicule to tell people about it, a Grose Vale resident told the Hawkesbury Gazette this week.

Chris Coffey has been tracking black panther sightings in the district for 13 years, and is frustrated by people’s reluctance to divulge their experiences when they have seen big black cats.

Collecting evidence of panthers in the Hawkesbury over many years, Ms Coffey has had a panther trap built.

She said they had a big cat in there one night but the trap was too small and it managed to back its way out – with the roadkill wallaby used as bait.

“We extended it so now it’s much larger,” she said. “We also have three heat-activated cameras.”

She is asking any resident who has seen a big black cat to contact Hawkesbury City Council, which keeps a register of sightings, or the Gazette, or her.

She also asked that if anyone has seen a panther on their property and would be happy for the trap and cameras to be put on their land, she may finally be able to prove that there are panthers in the Hawkesbury.

She said sightings were not just at dusk and dawn – people were seeing them at all times of the day and she wanted people to realise what danger their children could be in near the bush.