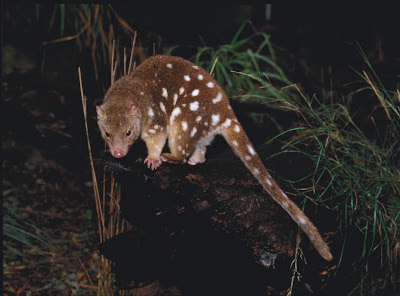 We've just been sent this petition - slap your moniker on it if you have a moment...

Proposed development of a mega-resort in the Elbow Valley region of SE Queensland may push the Spotted-Tailed Quoll to local extinction.

Chinese Development Company Joyful View Garden Real Estate proposes to develop over 2090 acres of land into a mix of permanent resident and resort-style accommodation for overseas visitors and residents of up to 4000 people. The environmental impact of the mini-city may push the Spotted-Tailed Quoll to extinction in this region. Research (Meyer-Gleaves 2007) shows this area to be the last stronghold of the species in south east Queensland.

The animal is mainland Australias largest marsupial carnivore and is listed by the Federal Government as endangered. It is also recognised internationally as vulnerable under the IUCN Red List of Threatened Species. Wildlife Preservation Society of Qld cites 'habitat destruction and loss, many types of development or industry and increased traffic on roads' as the key reasons the Spotted-Tailed Quoll has become endangered. Recent research adds 'removal of cover, contact with exotic predators and human populations, impact of introduced species, persecution and hunting, and poisoning programs'.

In 2009 Southern Downs Regional Council opposed the proposed extension of the Unimin mine in the same region, citing the proposed expansion might have a potential impact on the habitat of the quoll yet passed this proposed development in June 2011 with no consideration for the species!

The recent extinction rate of mammals in Australia is unequalled anywhere in the world.

The petition will be sent to the Minister of Sustainability and Environment who will make the final decision on approval of the mega-resort.

We need YOUR help to ensure the survival of this important native carnivore. Please sign the petition to add your voice to help one with none.
Posted by RR at 19:42