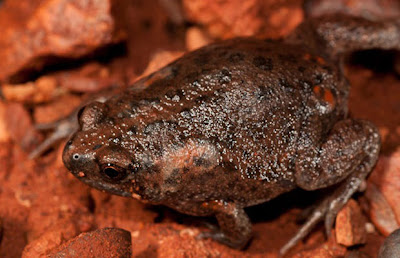 Researchers have discovered a new miniature frog species in the Pilbara region of Western Australia.

The new species, called the Pilbara toadlet (Uperoleia saxatilis), measures just two centimeters long and is found in the rocky gorges and creeks of the arid region.

Lead researcher and PhD student from ANU, Renee Catullo said the new toadlet is unique for its species.

"It has big glands and it has brown spots all over it, it also has a different call from all the other species," she said.

"It actually lives in rocky landscapes instead of sandy soils, so it's a burrowing frog that's adapted to live in a different type of landscape."

The new discovery has proven that the deserts of Australia are teeming with life. The barren landscape could still hold new species that scientists haven't found yet.

“Little is known about this small, brown creature but it has been found following cyclonic rains and occurs in rocky gorges and creeks of the region. The good news is that it appears to be secure from a conservation perspective," she said.

“Toadlets are native to Australia and this new species brings the total number to 27, the second largest group of frog species in the country."

The discovery was part of a research project funded by the Herman Slade Foundation that uses genetic techniques to try and understand the true number of species of toadlets.

“Genetic techniques are increasingly being used to identify new species across Australia that use calls, pheromones, or behaviour to tell each other apart,” Ms Catullo said.

“In these cases genetic techniques can tell us which groups are interbreeding, even when it’s hard to visually differentiate them."
Posted by RR at 18:29