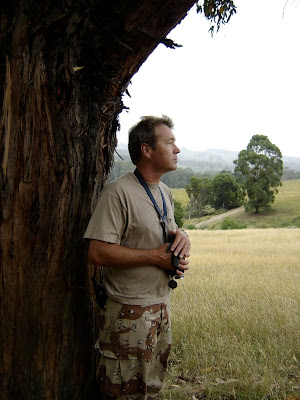 How did you first get involved in researching strange and mysterious creatures?
In 2001 some friends and I got involved with organising the Myths and Monsters conference in Sydney, which featured speakers from all over Australia. I found some of the talks fascinating, and ever since I’ve been collecting reports and looking for evidence of Australian cryptids.

What were some of the early influences in your life?
I’ve always been interested in weird stuff - mystery animals seemed like a natural progression!

Have you personally seen one of these creatures?
I saw something through a starlight scope, about the size of a German Shepherd, at the crack of dawn near Maryborough, Victoria. It moved with the speed, grace and fluidity of a felid. I was watching a living legend in action, and that was the tipping point.

What creatures particularly interest you?
Big cats, Thylacines and Yowies.

What cryptids are most likely to exist in your opinion?
Big cats, Thylacines possibly, and the Orang Pendek.

Have you developed any theories around where the more unusual animals - i.e. yowies/bigfoot - have come from?
No, not really.

Have you written any books/articles?
Yes, I’ve co-written a few articles for Fortean Times and Animals & Men magazines, as well as a book on Australia’s ‘alien big cat’ mystery, called Australian Big Cats: An Unnatural History of Panthers.

How many mystery animal reports would you receive a year?
Probably between 10 and 20.

What’s the closest you’ve personally come to finding something?
Apart from the Maryborough encounter, there was the time I was invited to a private property several years ago in Victoria by a gentleman who was aware of some cats living in an old mine shaft. The anecdotal evidence was compelling. Unfortunately he died as a result of injuries he sustained in a plane crash a day or so before I was to visit, so I never found the location.

What’s the farthest you’ve traveled to go ‘in search of’ mystery animals?
I’ve travelled all over Australia, and the next destination on my itinerary is Sumatra, Indonesia.

What’s next for you - any trips planned? Books or articles to write? Talks to give?
In September I’m joining a Centre of Fortean Zoology expedition to Sumatra to look for evidence of the Orang Pendek, a small human-like ape. I'm also involved with a few other cryptozoologically-inclined writing projects.

Could you share some of your favourite cryptozoology book titles with us?


What advice would you give anyone getting into the field of cryptozoology?
Keep an open and sceptical mind, be prepared to be disappointed and realise witnesses always make mistakes, and people will always exaggerate the quality of their photos and video.
Posted by RR at 15:16