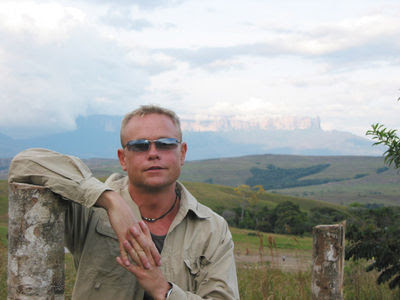 How did you first get involved in researching strange and mysterious creatures?
It found me I guess. First experience was in '95 in my back yard around midnight while living at Mt. Tamborine, Queensland. I arrived home to something large and bipedal walking in the swamp, ripping up trees and plants and throwing them through the forest. The vocalisations were that of grunting and yelling.

The event that sealed my research was when I was stalked and chased at 11pm at Ormeau, Queensland in '97. I know if it had got hold of me, I would not be here now. I was very lucky. If I had not stopped where I did to make a phone call, there would have been no chance of escape.

After an event such as that, you need answers.

Soon after that, I met Neil Frost and the roller coaster ride began.

What were some of the early influences in your life?
Nothing cryptozoology-wise, besides the old ‘In Search Of’ series. I think if anything, I was more interested in the ghosty/spirit thing.

Have you personally seen one of these creatures?
Yowie. Sure have. Even hit by one in 2009. Over the years we have spent a lot of time in various locations around the Country. Had many encounters in different locations.

What creatures particularly interest you?
Pretty much just the Yowie. It’s what I know, and have the most experience with.

What cryptids are most likely to exist in your opinion?
Yowie (of course), Thylacine (because I have seen one) and Big Cats.

What’s your favourite Australian food?
Steak Diane with chips.
I don't like those foreign foods with funny names.

Have you developed any theories around where the more unusual animals - i.e. yowies/bigfoot - have come from?
Don’t know and don’t care really. The fact of the matter is that they are here. The rest is just the fine print.

Have you written any books/articles?
Articles here and there; I am often asked to write a book, however I don’t have the concentration span for a book right now.

How many mystery animal reports would you receive a year?
Perhaps 100-150 on various topics.

What’s the closest you’ve personally come to finding something?
Being hit in the chest is pretty close.

What’s the farthest you’ve traveled to go ‘in search of’ mystery animals?
Australia to the Amazon. Also went to the Solomon Islands.

What’s next for you - any trips planned? Books or articles to write? Talks to give?
Waiting for winter to head north, then it’s time to pull the boots on, dust off the FLIR and be active again.

Could you share some of your favourite cryptozoology book titles with us?
I don’t feel I need to read books - I create my own experiences. Having said that, obviously Paul and Tony’s books ‘Out of the Shadows

’ are a must-read for anyone. I certainly did enjoy both. Oh, and let's not forget Mike and Bec’s Big Cats!

What advice would you give anyone getting into the field of cryptozoology?
Get along with other researchers. Share info. It’s a team effort.