Jack gets his hands on a Thylacine 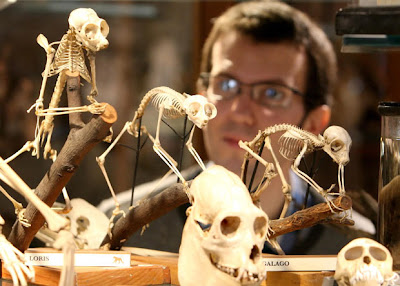 Some guys get all the great jobs!

We've mentioned the Grant Museum of Zoology's learning and access manager Jack Ashby on this blog before. Recently he had a rather amazing experience:

"Just last week I had to remove one of the world's only pickled adult thylacines from its jar for a researcher. Preserved specimens are reasonably inert - they smell only of alcohol (or whatever preservative they are in) and are normally only as fragile as the animal was alive.

Having in my hands the visceral weight of one of the most iconic stories of extinction, and a personal passion of mine, was pretty thrilling. Thylacines were a kind of Tasmanian marsupial that looked and behaved a lot like a stripy wolf (they are also called Tasmanian tigers). As the Tasmanian sheep farming industry grew in the second half of the 19th century, thylacines were blamed for predating sheep and a bounty was put on their heads. We now know that it was unlikely that they took many sheep, but as a result of the persecution under the bounty system none has been (officially) seen since 1936 (though many people believe they are still out there).

To many ecologically minded folk, the thylacine represents a practically deliberate extinction, resulting from the political pressure of a powerful industry with a destructive agenda. The thylacine was the largest remaining marsupial carnivore and its loss is genuinely tragic.

I have worked with many skeletons and skulls but holding the preserved carcass last week was almost chilling. It is some consolation that, with proper care specimens like this one could potentially last for centuries, so hopefully its story won't be forgotten."
Posted by RR at 16:09