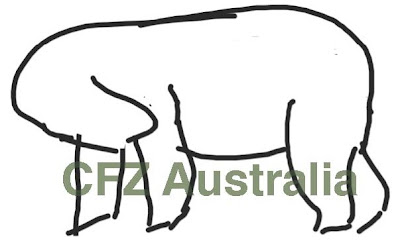 About 160-odd kilometres from Gayndah, Queensland is the town of Nanango. Both towns share more than a state, they share a number of strange sightings of a black bear-like creature - what could it be?

The Gayndah Bear first came to light in 2000. The strange bear-like creature was later photographed by Julian Nott and Peter Raffels (see the picture below). The creature was sighted several times and described as being a metre-high (3.3 feet) with black hair covering its body.

The creature was spotted by Gayndah resident Shirley Humphreys in January.

Although it looked like a man it had the shape of a bear and ambled along, rather than walking or hopping, she said.

Humphreys saw the animal from about 70 metres (231 feet) at dusk on a sandbank by a river before it vanished into trees.

Her brother Allan Bucholz also claims he saw the animal fleetingly four or five weeks earlier and there have been other strange happenings such as tools thrown around outside a shed.

"Half of the (Gayndah) councillors are non-believers about the whole thing," Huth said.

"But I can honestly say I really do believe the people who've reported the sightings. They're credible people and they're very respected members of our community. They did see something. There's no doubt."

He said there was a story going around that a bear escaped from a nearby circus in 1959. Meanwhile, some local Aborigines claimed the sighting was linked to the Jongari or 'hairman'.

But let's fast-forward to Nanango in 2011 - here's Mary's story (her sketch is shown above):

I live in Nanango, Queensland. With the flooding, the traffic along the highway from Kingaroy to Nanango had been slowed down to 60km/hr due to road repairs in May 2011. I work in Kingaroy and I was traveling home to Nanango approaching Horse Creek at 60km/hr.

I notice an animal on the bank of the creek which was to my left. At first glance, i thought it might have been a cow because a lot of farmers have cattle on their properties and it is not unusual to see one grazing on a creek bank. Or maybe a very large dog? but because of its shape and height (large middle and thick legs, height about a one metre to a metre and a half) and the way it stood, I looked again.

It wasn’t a cow or a dog because of the way it stood and its shape. Its legs were too thick and not shaped like cattle, it was also the way it moved, head dipped and looking behind towards thicker bush. With the flooding that occurred this year the reeds and long grass have been flattened so it was a clear view at the animal. I guess it could have been a wild boar but it legs were too thick. it was black and I did not see its ears or eyes.

It looked like a black bear. I was thinking it was between 2 or 3 o’clock I saw it on  a clear day but it may have been later.

I decided that maybe I should report this sighting because someone else may have seen it. I haven’t heard or read anything about an unusual animal in the area lately. 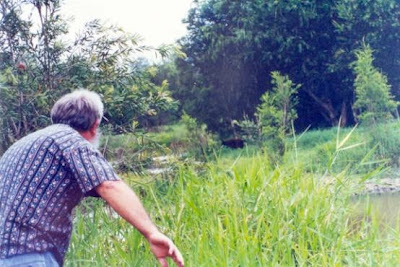