Big Brutus is no crock - he's the real deal 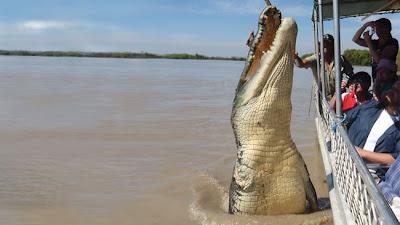 This scaly 5.5 meter-long saltwater crocodile regularly leaps out of the water alongside tourists floating in a tin boat, aiming for a chunk of buffalo meat hanging from a stick.

But when photos of airborne Brutus appeared in Australian newspapers recently, they immediately sparked doubt that such a massive crocodile existed.

"That crocodile is 100 per cent real. We've had forensics police look at the picture," said Maxine Bowman, a staff member of Adelaide River Cruises, who take daily tours on the river to feed Brutus and other crocodiles in the area.

Missing a front leg, rumored to be the result of a shark attack, Brutus leaps into the air for food when he's in the area.

"Seriously, what people get wrong is they think they're trained to do that, they're not," Bowman told Reuters.

"In an normal environment if it's hungry (a crocodile) will naturally jump out of the water. They're absolutely beautiful creatures, seriously."

Throughout the Northern Territory, where the famed movie "Crocodile Dundee" was filmed, there are warning signs to protect tourists from the crocodiles, which are common, and fatalities do occur from time to time.

"I think the Northern Territory is the only place in Australia where you're licensed to feed crocodiles and we're one of the operators licensed," Bowman said.

"We are very environmentally friendly, we don't have cappuccino machines on our boats. It's all about the animals in the region."