Australia a cryptid hotspot (but we knew that, right?) 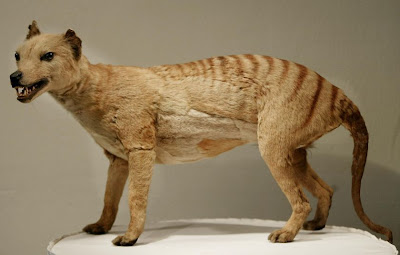 Hot on the heels of yesterday's discovery of a new species of minature frog in Australia...

Most of the world's "missing" or undiscovered species live in regions already identified by scientists as conservation priorities, including Australia, according to a new study published in the journal Proceedings of the National Academy of Sciences.

The study's findings suggest recent conservation efforts have been on target and should reduce uncertainty over global conservation priorities, its team of international authors say. But, they add, the extinction threat for many of the as-yet undiscovered species is worse than previously feared.

"We show that the majority of the world's 'missing species' are hiding away on some of the most threatened landscapes in the world," says Stuart Pimm, Doris Duke Professor of Conservation at Duke University's Nicholas School of the Environment. "This considerably increases the number of threatened and endangered species around the world."

Six regions already identified by conservation scientists as hotspots - Mexico to Panama; Colombia; Ecuador to Peru; Paraguay and Chile southward; southern Africa; and Australia - were estimated by the models to contain 70 percent of all predicted missing species. Only two regions with high estimates of missing species - the region from Angola to Zimbabwe, and the northern Palearctic, which encompasses parts of Europe and Asia - contained no biodiversity hotspots.
Posted by RR at 08:00