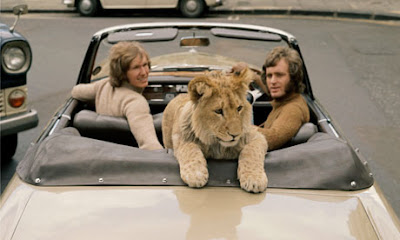 Back in the 1960s, it was considered to be pretty groovy to own an exotic animal - far out, even! So when two Australians travelled abroad and ended up sharing a flat in the heart of the captial, having a wild lion sharing their flat didn't seem that outrageous in London...
In 1969, John Rendall and his friend Anthony "Ace" Bourke, came across a lion cub in Harrods, London, which then traded in exotic animals. They fell in love with him and took him home to their Chelsea flat.

They named the cub Christian, inspired by a biblical sense of irony. He lived with them in a Kings Road furniture shop, SophistoCat, where he had a giant tray of cat litter and rarely ruined the store's furniture. He played with local children in the walled garden of a churchyard. He was fed steak and taken to restaurants and glamorous parties in the back of their Mercedes cabriolet.

In London in the 60s, says Rendall, anything was possible. "Christian wasn't the only wild cat in this world. His neighbour was a serval cat. There was a chap in Battersea with a puma. John Aspinall had his tigers in Eaton Square and there were cheetahs and cougars roaming around Regent Street.

"An exotic animal in London was just a part of exotic, experimental London. There were so many things going on. There was the fashion, the music. We would see the Stones and the Beatles driving up and down Kings Road. The Stones, who rehearsed around the corner, used to pop in and visit Christian frequently. In that milieu, we were just a couple of Aussies with a lion."

Rendall and Bourke had known each other in their native Australia and were drawn together by their love of animals. Growing up on a farm, deep in the rugged red landscapes of the outback, Rendall rode horses, and the family pets included cattle dogs, cats and injured birds and orphaned baby kangaroos, who were hand-reared until they were old enough to be set free.

After graduating from university, they made their separate ways to London and met by chance. They eventually got a flat together, finding work and lodging over the trendy Chelsea furniture shop, where they "persuaded the owners they needed a lion on the premises", after spending days looking for a flat with an outside space "for our dog". They even advertised in the Times: "Lion cub and two young men seeking suitable garden flat/house", hoping to find "a courageous or eccentric landlord".

The two men wrote a bestseller, A Lion Called Christian, in 1971, recounting their life while he grew from a cub to a young adult, and their decision to return him to the African wilderness.

Through a chance meeting with the actors Virginia McKenna and Bill Travers, stars of the 1966 film Born Free, Christian was flown to Kenya and placed in the care of the lion conservationist George Adamson to introduce him to the wild, at the Kora National Park. "I think George got quite a shock when he met us," he says, laughing. "Straight from Kings Road, in all our gear – flares and with hair everywhere. We stood out from everyone else in Nairobi. But then so did Christian. He wasn't dressed for the heat after coming from winter in England, so he had a thick coat. For the first few days, he behaved like the worst kind of tourist, avoiding the sun and lolling on our camp beds."

The visit to Kora led to a lifelong affinity with Africa and its wildlife, but also to a long relationship with Adamson. "When we took Christian to Africa, it was my first visit to that magnificent continent. I was entranced by the sights and smells, and to see Christian in his right environment was so exciting. Suddenly, instead of being 'exotic' he just fit in, blending into the landscape. Even so, it was wrenching to leave him behind knowing all the inevitable dangers and hardships facing an animal in the wild, particularly a pampered one."