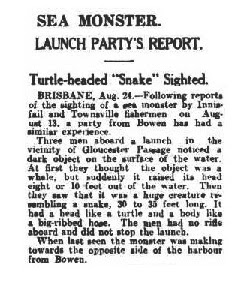 Fishermen have been reporting run-ins with strange sea creatures for centuries, even right here in Australian waters.
A giant seafaring snake 30-35ft long with a "head like a turtle" alarmed a party of fishermen in 1934, who described the aquatic anomaly as having "a body like a big-ribbed hose". So what was it?
Most sea snakes only grow to lengths of 3-5m, with the exception of the Yellow Sea Snake (below) which can reach almost 10ft in length. 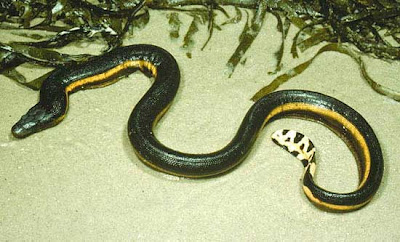 Responding to the claims in the newspaper, a letter writer observed:

I do not wish to compete against your well known contributor, 'BUI Bowyang,' in the telling of a tall yarn, but 'the sensational report ot the sighting of a huge sea serpent by the crew at the steamer 'St. Francois Xavier,' at Port Stephens (N.S.W.) prompts me to state that there is no reason to ridicule the story.

Some time back when Mr T. Murray, a well known local angler, was fishing In a boat off King's Beach, his attention was attracted by a loud thumping sound some distance out at sea. Suddenly a huge serpent-like creature reared itself, about 30 feet out of the water, and Mr Murray could distinctly see a spike-like fin, resembling that of a shark, sticking out of its back.

Each time the creature rose in the air it threw itself on the surface of the sea 'with terrific force. After a time it proceeded towards Holbourne Island and disappeared from view. Some months back a lady residing on Queen's Beach sighted a similar creature.

Be it myth or reality the fact remains that there must still be many denizens of the deep unknown to man, and one cannot believe that all people who claim to have seen the sea-serpent were romancers, seeking notoriety.

Could these accounts be referring to the rare so-called 'eel sharks' (frilled sharks)? Certainly the head could at some angles look turtle-like, but they certainly don't grow any larger than 6-7ft - but then again some fishermen's licence may have been taken when exaggerating the size! 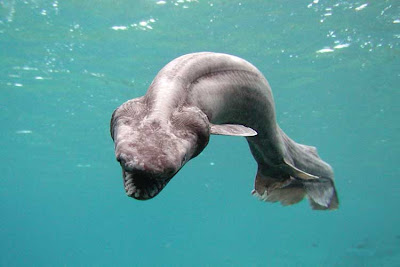