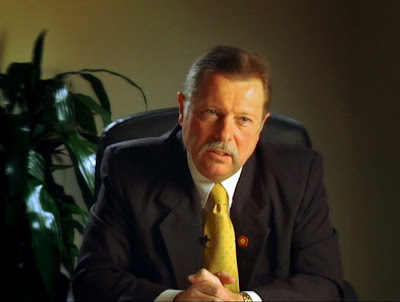 How did you first get involved in researching strange and mysterious creatures?
Prior to 1991, if you had asked me about Big Cats in Australia, like most people I would probably have laughed at you. It was on a fateful day in November 1991, and from memory it was my birthday, I had taken the day off work and I was fossicking for gold with my metal detector in Jones’ Creek near Tarnagulla, which is just North of Dunolly in Victoria. I had walked up Jones’ Creek for about a kilometre swinging my detector when I swung my detector over a footprint impression in soft brown clay type mud in the creek.

The footprint was about 6 to 7 inches in diameter and was that of a large cat. My instant reaction was to swear, go into a cold sweat and to reach down to unclip the holder on the machete hanging from my belt.

Almost at once I realised the folly of this thought and said to myself there are no lions in Australia. I knelt down and examined the footprint. It was an exact imprint of a very big cat.

What I found rather strange though, was that the claws were very clearly visible in the clay. This really put me off, as I knew that cat’s claws were retractable. So I then started to try to convince myself that what I was looking at was the print of a wombat.

I really knew to myself though that it was the print of a very big cat. But my first experience with Yowies was much earlier than that; But that’s another story altogether.

What were some of the early influences in your life?
Until I was six years old I was an only child, that was until my brother came along. Up until I was six I had to make up my own fun back in the ‘50s and I also became a bit of an inventor then which developed into deep thinking.

I started to read Lobsang Rampa at an early age and monster books. I also had a great interest in Marvel Super Heroes, The Samurai and James Bond. I have always had a strong interest in music.

Have you personally seen one of these creatures?
Interestingly enough I have never seen a Big Cat or a Yowie, but I was stalked by a Big Cat which was no more than 30 to 40 metres away from me. Its growl was unbelievable.

Once a Yowie tried to enter my tent back in the early 70’s at Ashford. And I saw that creature as a silhouette outside of the entrance of the tent. I have found may prints of many unidentified creatures and hold Barbara Holdsworth collection of prints.

Once when we were coming back from a walk to the Mysterious Face at Torrington, my wife saw a Puma just near the car park in the swamp area.

What creatures particularly interest you?
While I have a strong interest in Big Cats, I would dearly love to discover or have a personal sighting of a Thylacoleo. I am also quite interested in Yowies.

What cryptids are most likely to exist in your opinion?
I know that Big Cats do not only exist in Australia, but are thriving. I know that Yowies are real and do exist here also. And I have a short 2 second video of an unknown animal that was filmed near Charleville in Queensland. My daughter discovered a track line of prints in mud near Stanthorpe that I took casts that no one has ever been able to identify.

What’s your favourite?
Do I have to choose just one. They are all my favourites. I think it is the mystery that drives me.

Have you developed any theories around where the more unusual animals - i.e. yowies/bigfoot - have come from?
I was interviewed for another magazine and I developed a nest of theories that I think are plausible answers that go some way in to cover this question. There are on my website at http://uqconnect.net/~zzpclach/bigcats-theories.htm

Have you written any books/articles?
Yes I have written numerous articles over the years and had several radio interviews also, but alas as yet I have not written any books. I did start writing a crypto book a few years back, and when I retire soon, I intend to get back into that project.

Do you have a website?
Yes I do have a website that has several areas of my interests on it. The address for the section that I have dedicated to my Big Cats investigations is http://uqconnect.net/~zzpclach/bigcatsentry.htm

How many mystery animal reports would you receive a year?
That’s a good question, they can come in spurts and some weeks none at all. I do get quite a few reports that I cannot print as there is just no substance to them, as I am sure you also get.

What’s the closest you’ve personally come to finding something?
I personally have found many prints that I have taken cast of that at this stage cannot be identified. I have also discovered several archaeological sites too.

What’s the farthest you’ve travelled to go ‘in search of’ mystery animals?
Pretty much anywhere in the eastern states of Australia, which also included a trip to South Australia to do some research on the Tantanoola Tiger.

What’s next for you - any trips planned? Books or articles to write? Talks to give?
I think as I said above the next big project with be the Crypto book, which will be very different to anything that has come out to date.

Could you share some of your favourite cryptozoology book titles with us?
Some of the books I have used over the years are; which of course include Australian Big Cats: An Unnatural History of Panthers

, in which I also feature:

What advice would you give anyone getting into the field of cryptozoology?
Be learned, be sceptical but not a sceptic, there is no substitute for field research, be prepared, always carry plaster of Paris and water (not together he he), always have a camera and note book, a proper GPS that can take Way Points, be not arrogant, talk to as many witnesses as you can and even those who are not witnesses.

I have been an Investigator for over 20 years and those life skills have been invaluable. Be scientific but not a scientist. Always have an open mind and be flexible. (Sometimes a find that you think is a tooth is not a tooth at all.)

Happy Investigations!
Posted by RR at 17:30