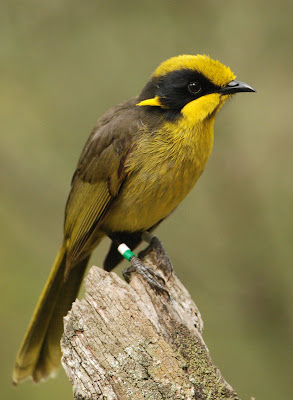 An endangered helmeted honeyeater bird spotted near Melbourne and aged three times its average lifespan has entered the record books!

The 16-year-old male, nicknamed The Dear Old Boy and recorded as the oldest wild bird of its species, was recently spotted in Yellingbo Nature Conservation Reserve, north-east of Melbourne.

Department of Sustainability and Environment (DSE) ornithologist Bruce Quin said the bird's age was remarkable given the species' endangered status.

"This bird, born in the wild, has already survived for three times longer than the estimated average lifespan despite the species being critically endangered," he said.

Male helmeted honeyeaters born in the wild at Yellingbo have a life expectancy of about 5.7 years, while females typically live for 4.5 years.

The Dear Old Boy was tagged as a nestling in November 1994 as part of a tracking program of the threatened native species.

"We were a bit worried that he had died late last year because we hadn't seen him for a couple of months," Mr Quin said.

"But he showed up again in the last few months and we are hoping he is still out there."

The DSE believes 75 helmeted honeyeaters are living in the wild in Yellingbo and the state's Bunyip State Park.

Most years since 1995 captive bred helmeted honeyeaters have been released into the wild in the hope of boosting the population.
Posted by RR at 20:56