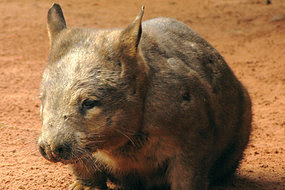 A southern hairy-nosed wombat has been found in Victoria for the first time.

The discovery was made last week on the Trust for Nature property, at Neds Corner Station, on the Murray River in far north-west Victoria.

The manager of Ned's Corner Station, Peter Barnes, says there are no recorded wombat colonies anywhere in the region and the discovery was a shock.

He says the nearest known areas for the marsupial are around Renmark, in South Australia, and in southern New South Wales.

He says they often travel in family groups.

"Maybe the good season and or the floods have caused his movement and that's what we would like to think," he said.

"The other scenario is that it may have been dropped off there by either a carer or some practical joker."
Posted by RR at 15:52