Gene map may pull Devil back from brink 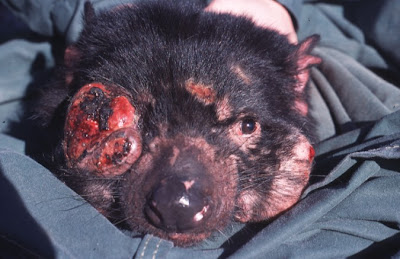 Efforts to save the Tasmanian devil from extinction have been given a boost by the publication of the entire genetic sequence of two devils, the ABC reports.

Thirty scientists from Australia, Denmark and the USA collaborated on the study, which is published in this week's edition of the Proceedings of the National Academy of Sciences.

Former Australian researcher Professor Vanessa Hayes of the J Craig Venter Institute in San Diego - and one of the study's three lead authors - says DFTD was first spotted in 1996.

Cedric and Spirit's genome sequence joins that of Salem, a female devil whose sequence was completed last year by researchers at the Wellcome Trust Sanger Institute, England.
Posted by RR at 19:03