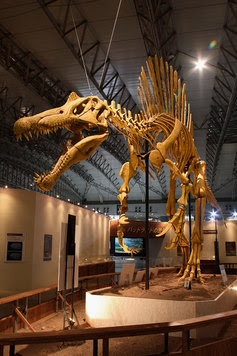 Australia's first carnivorous dinosaur has been unearthed by a team of palaeontologists.

The discovery of a 'spinosaur' neck vertebra in Victoria shows the fish-eating theropod dinosaur was not restricted to the Northern Hemisphere, as previously thought.

The findings, published in the journal Biology Letters, also suggest that dinosaurs found in other parts of the world may also have inhabited Australia in the Early Cretaceous period.

Researchers from London's Natural History Museum, the University of Cambridge, Museum Victoria and Monash University were thrilled when they were able to identify the fossil.

"Spinosaurs were previously known to be from Europe, Africa and South America," says Dr Thomas Rich, palaeontologist from Museum Victoria. "The fact that they existed in Australia changes our understanding of the evolution of this group of dinosaurs."

The vertebra fossil was discovered by Michael Cleeland (a well-known name in Australian cryptozoology circles) and George Caspar near Victoria's Cape Otway Lighthouse in 2005. It was then painstakingly prepared at Museum Victoria until it could be identified as Australia's first-ever spinosaurid.

The team was able to deduce the neck vertebra belonged to a small juvenile, around two metres long, which lived 105 million years ago.

Some types of spinosaurs - meaning 'spine lizard'- are thought to have been the largest of all known carnivorous dinosaurs, including the Tyrannosaurus Rex and Giganotosaurus. Some fossil remains show they had narrow crocodile-like skulls, which were probably used for eating fish. Fossils also suggest they had distinctive spines, with long extensions of the vertebra forming a sail on its back.

But another co-author on the paper, Professor Patricia Vickers-Rich, palaeontologist at Monash University, says it isn't possible to draw conclusions about the type of newly announced spinosaur, its sex or its body structure when there is only a 4cm vertebra to go by. These details can only be fleshed out if more spinosaur fossils are discovered.

At the time the spinosaur lived, Australia was not an isolated landmass, making it easier for dinosaurs to move around.

"When the Earth evolved into separate continents, the various families of dinosaurs had already reached those landmasses, which explains why the same ones have been found in places now far apart from one another," says Thomas.

Patricia says this challenges the idea an endemic fauna was present in Australia 110-120 million years ago.
She believes there could be many more dinosaur groups still to be discovered in Australia.

"The record is so sparse and these fossils are so difficult to find. Every bone has the chance to be something different," Patricia says. "[This vertebra] could have been from something more common, but spinosaurs are carnivores, which are usually very rare in population." 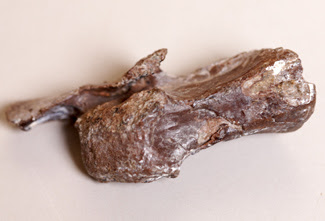