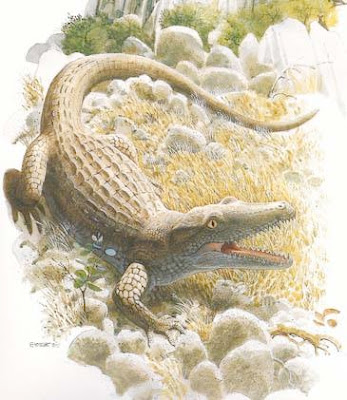 Quinkana is an extinct genus of mekosuchine crocodile that lived in Australia from 24 million years ago to 40,000 years ago.

The terrestrial crocodile had relatively long, agile legs, very different from the splayed limbs of modern crocodiles, and its teeth were curved and sharp, like those of a tyrannosaur dinosaur.

By the Pleistocene Quinkana had become one of the top terrestrial predators of Australia, possessing long legs and ziphodont teeth (lateromedially compressed, recurved and serrated).

Unlike today's Australian crocodiles, this large 220kg land-dwelling reptile's long legs made it a fast hunter. It tired out its prey of mammals, birds and other reptiles in long chases.

Its sharp teeth allowed it to tear apart its prey, unlike its water-dwelling surviving cousins whose teeth are better suited to holding and drowning their prey.

Quinkana belonged to a group of crocodiles (mekosuchines) that are now all extinct. Quinkana comes from the 'Quinkans', a legendary folk from Aboriginal myths.