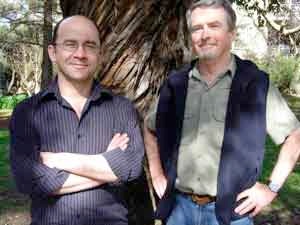 The fifth guest in our new Meet the Cryptozoologist series is well-known Australian Fortean and author Paul Cropper (above left) one half of a dynamic duo that includes co-author Tony Healy.


Welcome Paul!
How did you first get involved in researching strange and mysterious creatures?
My interest in cryptozoology began while I was at High School in the early 1970s. I remember my parents had a Readers Digest coffee-table book on Animal Mysteries that had an article on the Loch Ness investigation. I also used to buy an English magazine for kids called ‘World of Wonder’ that regularly ran articles on the Yeti, Sea Serpents and other mysteries.

I didn’t really get started until about 1975, when I saw a newspaper article on the Emmaville panther, which I cut out and put aside. After that, in about 1976/7, I came across a fantastic local magazine called ‘Psychic and Paranormal Australian’ (sure hate to meet one of those) which featured articles by Rex Gilroy. I was hooked.

What were some of the early influences in your life?
In terms of cryptozoology, probably Tim Dinsdale’s Loch Ness books and also John Keel. His ‘Strange Creatures’ is one of all time favourite books. I was lucky enough to meet him in New York in the 1990s.

Have you personally seen one of these creatures?
No. In Texas in 2005 I heard a roar like a lion coming from the other side of bigfoot-haunted Caddo Lake. I came across what may have been yowie footprints near Kempsey NSW in 1995. Locally, I’ve spent time with Dean Harrison and Neal Frost in the Blue Mountains and heard some really strange stuff, but I’ve never had a close-up visual sighting.

What creatures particularly interest you?
Morag in Loch Morar. I love the Scottish lake monsters and Loch Morar was one of the most beautiful places I’ve ever visited.

What cryptids are most likely to exist in your opinion?
Orang Pendek, Yeti and of course our own ABCs.

What’s your favourite?
Nessie. I’ve been to Loch Ness three times and would go back in a second. If there isn’t a monster there, there should be!

Have you developed any theories around where the more unusual animals - i.e. yowies/bigfoot - have come from?
No. When I started I was convinced they were flesh and blood. After I read Keel, I was sure they were all paranormal. Now, I don’t really have a theory, just a certainty that the experiences are genuine and they have been happening for centuries.

Have you written any books/articles?
Yes. Out Of The Shadows, Mystery Animals Of Australia (1994) and The Yowie (2006) with Tony Healy.

How many mystery animal reports would you receive a year?
Around 20-30.

What’s the closest you’ve personally come to finding something?
When I found what may have been yowie footprints near Kempsey NSW in 1995. They are detailed on the website.

What’s the farthest you’ve traveled to go ‘in search of’ mystery animals?
Russia.

What’s next for you - any trips planned? Books or articles to write? Talks to give?
Back to Russia in September to catch up with the bigfooters there.

Could you share some of your favourite cryptozoology book titles with us?
The Search for Morag (Campbell/Solomon), Sasquatch the Apes Among Us (Green), Bunyips and Bigfoots (Smith).

What advice would you give anyone getting into the field of cryptozoology?
Keep an open mind and enjoy yourself.
Posted by RR at 19:26

Labels: cryptozoologist, out of the shadows, paul cropper, the yowie: in search of australia's bigfoot