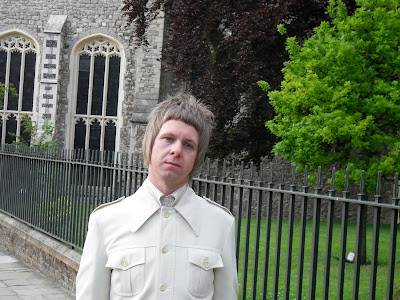 How did you first get involved in researching strange and mysterious creatures?
I logged my first report when I was nine years of age (I'm 36 now) and watching the creepy docu-drama 'The Legend Of Boggy Creek' also had a huge impact on my life, as did a book by Carey Miller called 'A Dictionary Of Monsters & Mysterious Beasts', which, many years later I would base my 'Monster!' book on.

What were some of the early influences in your life?
As above I guess, although stories from my dad and grandad played a big part in me becoming the person I am today.

Have you personally seen one of these creatures?
I have seen a black leopard on three occasions - one creature twice in 2000, and another cat in 2008. I have also seen a lynx on two occasions, which was caught on film.

What creatures particularly interest you?
I have always been interested in the more commonly known cryptids, but what interests me are the monsters no-one knows about, the creatures which are more ethereal, or the stuff of legend, i.e. Bunnyman, Noodleman, Capilla Del Monte imp, vampire cats, multi-coloured hellhounds, Musca Macedda, Screech owls, Koguhpuk etc. That's why I wrote my 'Monster!' book, because cryptozoology is too much of a confining label and too many people think Mothman, Jersey Devil etc are cryptids, which they aren't.


What cryptids are most likely to exist in your opinion?
I think there is a strong case for Orang Pendek, Bigfoot, Yeti, the thylacine, and certainly some sea serpents.

What’s your favourite?
I don't really have a favourite cryptids, Bigfoot I guess.


What’s your favourite Australian cryptid?
Mmmm, I don't personally think the Yowie is flesh and blood so it wouldn't be a cryptid so I guess the thylacine, because to me the large, elusive cats roaming Australia are explainable and not cryptids.

Have you developed any theories around where the more unusual animals - i.e. yowies/bigfoot - have come from?
I think Bigfoot is a flesh and blood creature, but I don't believe the Yowie is although there is certainly enough vegetation to hide such a creature. Bigfoot may well be gigantopithicus, and again, there is enough undergrowth to hide a small population of very elusive animals - the footprint casts speak for themselves, especially with the dermal ridges. Too many people see Bigfoot for it not to be real.


Have you written any books/articles?
I have written hundreds of articles for magazines such as Fortean Times, Fate, Paranormal, and written for hundreds of newspapers, and am the author of: Monster! The A-Z Of Zooform Phenomena, Mystery Animals of Kent, Paranormal London, Paranormal Kent, Haunted Rochester, and the forthcoming Mystery Animals Of London, and also a book pertaining to cryptozoology in film.

Do you have a website(s)?

How many mystery animal reports would you receive a year?
I am a full-time monster hunter so I receive many reports a year, and my main research covers big cat sightings and on average receive about 150-180 sightings a year covering the south-east of England.

What’s the closest you’ve personally come to finding something?
Seeing the actual cats although finding evidence such as eaten sheep, paw prints, faeces etc is the next best evidence.

What’s the farthest you’ve traveled to go ‘in search of’ mystery animals?
Loch Ness, Scotland, in search of the fabled Nessie - which I believe is a large fish, something like a catfish.

What’s next for you - any trips planned? Books or articles to write? Talks to give?
I conduct talks on 'big cats' and folklore for a living, and conduct up to six a week. I write articles daily and carry out local expeditions at least twice a week.

Could you share some of your favourite cryptozoology book titles with us?
Rebecca Lang and Mike Williams 'Australian Big Cats'

is a brilliant book, one of the best I've read for a long time. Other favourites include, Jon Downes' 'The Owlman & Others'

, most of Karl Shuker's books are a fascinating read, and also 'Out Of The Shadows' by Cropper & Healy, and also their 'Yowie' book

. Anything original is always a good read. I have thousands of books but not many hold my attention like some of the more obscure crypto books.

What advice would you give anyone getting into the field of cryptozoology?
Always maintain a level of mystery, don't succumb to the petty politics, follow your heart, and always believe in monsters.