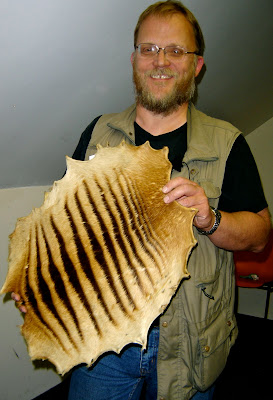 The third guest in our new Meet the Cryptozoologist series is CFZer and Danish zoologist Lars Thomas.

How did you first get involved in researching strange and mysterious creatures?
Things really started to come my way in 1988 when a magazine asked me to do a series of travel pieces on Great Britain, and I included a few strange animals in the collection.

What were some of the early influences in your life?
Buying a book about the Loch Ness monster at a book sale at the age of 11. And being an ardent fan of Sherlock Holmes and solving mysteries.

Have you personally seen one of these creatures?
I haven't seen any of the big ones, but I have probably seen a live huia-bird, som 55 years after their supposed extinction, and possibly a giant gecko as well.

What creatures particularly interest you?
Out-of-place animals and supposedly extinct ones.

What cryptids are most likely to exist in your opinion?
Sea-monsters of various kinds, but also some of the manlike things - Orang-pendek, Yeti and so forth. And definitely some of the supposedly extinct ones - and then of course alien big cats. Those I know for a fact exists.

What’s your favourite?
I have a weakness for Nordic stories about strange creatures in general.

What’s your favourite Australian cryptid?
The thylacine most definitely.

Have you developed any theories around where the more unusual animals - i.e. yowies/bigfoot - have come from?
Some of them might be new species of large primates, but some of them are probably also figments of imagination and moderne version of stories about the boogy-man.

Have you written any books/articles?
I have written 55 books - but apart from one in Icelandic, and an upcoming one for CFZ called Weird Waters, they are all in Danish. I have written a lot of articles - probably several hundreds, but again, mostly in Danish.

Do you have a website?
Nope, but I have a blog, called The Cryptodane, but I do not take as much care of it as I should. http://cryptodane.blogspot.com/

How many mystery animal reports would you receive a year?
About 20-30 in Denmark, and various bits and bobs from other parts of the world.

What’s the closest you’ve personally come to finding something?
Proving that a leopard had been on the loose in Huddisford Wood in Devon in 2010.

What’s the farthest you’ve traveled to go ‘in search of’ mystery animals?
From Denmark to Tasmania and New Zealand.

What’s next for you - any trips planned? Books or articles to write? Talks to give?
Three books to write - one on terrestrial critters in Northern Europe, one big one (the definitive volume on cryptozoology with the lovely Lang lady :-) ), one on New Zealand travels of strange animals, and one on folklore (especially for school-children) - that's four actually. And a few articles here and there, and 16 talks booked for this autumn.

Could you share some of your favourite cryptozoology book titles with us?
The classics - anything by Bernard Heuvelmans as well as Alien Animals by Janet and Colin Bord. They were the ones that really got me started.

What advice would you give anyone getting into the field of cryptozoology?
Be patient, keep an open mind - although not open enough to let your brain fall out, read as much as you can about cryptozoology, zoology and the study of folklore. And make sure you have a well-developed sense of humour. You are going to need it!
Posted by RR at 17:41