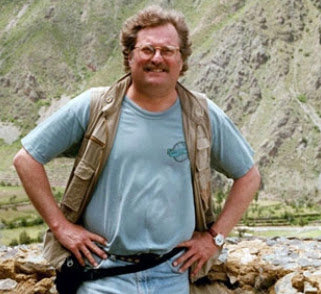 How did you first get involved in researching strange and mysterious creatures?
I became interested in this stuff in High School, back in the early 70s. I read books about bigfoot and the Loch Ness Monster and even had my local bookstore in Missoula, Montana specially order from me a copy of Bernard Heuvelmanns' classic book ON THE TRACK OF UNKNOWN ANIMALS.
What were some of the early influences in your life?
I was influenced by Hevelmanns and Ivan T. Sanderson, as well as by Erich von Daniken, Charles Berlitz, Andrew Tomas, Robert Charroux and other authors. I have a huge collection of books on cryptozoology and strange archeology, including lots of pulp paperbacks from the era.
Have you personally seen one of these creatures?
While I have participated in various Yeti and Bigfoot expeditions, and been to Loch Ness several times, I have not had any personal encounters as of yet.
What creatures particularly interest you?
I am fascinated by the giant snakes and stories of living dinosaurs... plus tales of living pterosaurs, the chupacabras, as well as bigfoot and skunk apes.
What cryptids are most likely to exist in your opinion?
I think that giant snakes, bigfoot and skunk apes are all genuine cryptids. Stories of Thunderbirds and living pterosaurs seem genuine, as well as the lake monsters and sea serpents... all very real.
What’s your favourite?
I suppose the stories of Thunderbirds and other flying cryptids are my favorite.
What’s your favourite Australian cryptid?
I would have to say the tales of the bunyip.
Have you developed any theories around where the more unusual...
I tend to think that these are real flesh and blood animals that live in remote places and are keep well away from humans for the most part. The world is really barely explored and there are lots of remote areas where shy animals can hide... not to mention the vast seas in which to live.
Check out David’s magazine, World Explorer at: www.wexclub.com
Posted by RR at 21:17