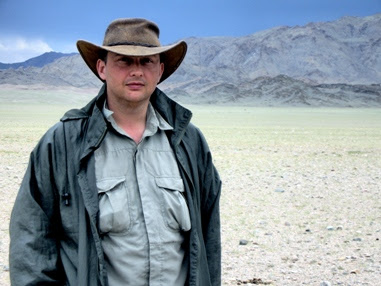 The fourth guest in our new Meet the Cryptozoologist series is UK adventurer and author Adam Davies.

How did you first get involved in researching strange and mysterious creatures?
I first started tracking animals when I was a child. As a teenager, I watched Arthur C. Clarke's Mysterious Worlds `, and it mentioned that Professor Ivan Mackerle was going to hunt of the Mokele-Mbembe in the Congo. From that day on, I decided I was going too.

What were some of the early influences in your life?
Please see above, but I have also been influenced by other historical figures. As a boy I first read accounts of Stanley's journeys down the Congo. The accounts of Shackleton, and Mallory and Irvine were also inspirational. I have grown up with Sir David Attenborough's wonderful series of documentaries,and have been in correspondence with him recently.

Have you personally seen one of these creatures?
Yes,I have seen the Seljord Serpent in Norway.It was amazing! Perched on my little boat, I had the most incredible adrenaline buzz as we chased after it. I felt like Captain Ahab!

What creatures particularly interest you?
I love looking for ‘Yeti’ type creatures, as I am fascinated about what we will learn by their discovery. Probably a lot about ourselves!! I also like Lake Monster investigations as well.

What cryptids are most likely to exist in your opinion?
The Orang-Pendek does exist, as does the Thylacine, ABCs, and the Seljord Serpent.I don't believe in all cryptids though - Chupacabaras are a no-no for me.

What’s your favourite?
My favourite is the Orang-Pendek. I am desperate to preserve the environment and prove its existence before it’s all destroyed. I feel a personal attachment there.

Have you developed any theories around where the more unusual animals - i.e. yowies/bigfoot - have come from?
Yes - take a look at the article I have written for EdgeScience magazine, issue 7. It’s all there!

Have you written any books/articles?
Yes, I have written lots of articles, and one book Adam Davies Extreme Expeditions, Travel Adventures Stalking the World's Mystery Animals.

Do you have a website?
Yes - if you tap Adam Davies Extreme Expeditions in to Google, you will find my website http://www.extreme-expeditions.com.

How many mystery animal reports would you receive a year?
On average I receive about two a week, but they tend to come in flows. Nothing for a couple of weeks, then I'll receive three in one day.

What’s the closest you’ve personally come to finding something?
I have seen and was part of a team who's findings on the Seljord Serpent were analysed by the Marine research in Bergen institute as being from an unknown species. Over the years I have had scientists form the USA, Britain, Denmark and Australia anlayse field research, and evidence I have brought back on the Orang-Pendek. The conclusions reached have been 'unknown primate'. I always send my any of my findings off to be analysed independently by respected academics, who are at the top of their fields.

What’s the farthest you’ve traveled to go ‘in search of’ mystery animals?
I have travelled all over the world, literally! Mongolia, China, the Congo, Norway, Russia India and many more!

What’s next for you - any trips planned? Books or articles to write? Talks to give?
My next planned trip is to Sumatra again in September. I would also like to have a go at hunting for Sasquatch pretty soon, and I have started looking into that.

Could you share some of your favourite cryptozoology book titles with us?
I would rather do it by author. Everyone knows Sanderson, but for modern stuff, have a look at titles by Karl Shuker and Loren Coleman for some good background and science on cryptids. Redfern and Freeman are fun, entertaining reads. Have a look at both types of the genre.

What advice would you give anyone getting into the field of cryptozoology?
I would say , go for it,get out there and go on expeditions, it's immensely rewarding, and you will remember what you did every single day of your life. If you want help or advice, then ask me!
Posted by RR at 21:20