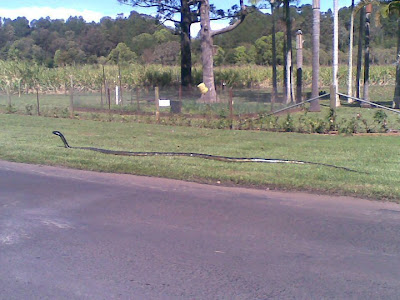 Whoa! Is this the biggest snake you have ever seen? According to the email that arrived in our inbox a few hours ago, it's apparently a King Brown or 'Mulga' snake - which can, for the doubters out there, grow as big as three metres - but is it legit?

We received this picture in an email that declared it was a Queensland native (is that possibly sugar cane, a staple Qld crop, growing in the background?).

But it also made the Hunter news in NSW recently, where it was claimed local road workers at Branxton flushed out the monster while road work was underway. Branxton is just outside Cessnock and is the gateway to most of the Hunter regions famous wineries.

And as far afield as America, where bigger is always better, they're claiming the snake as their own, a scaly refugee from the Mississippi floods no less!

So is this photo real or photoshopped?

The folks over at www.hoax-slayer.com seem to think it is a fake, as do the folk at the Australian Reptile Park on the NSW Central Coast (not far from the Hunter).

Update: This just in - a well respected herpetologist friend of the CFZ has poured cold water on this giant snake. "This is not genuine as King Browns don’t grow this big ANYWHERE!!! Also when I look carefully I can see certain unevenness and lumps along the body that indicate that this is not real or alive, Be interesting to know the background on this one!"
Posted by RR at 19:19