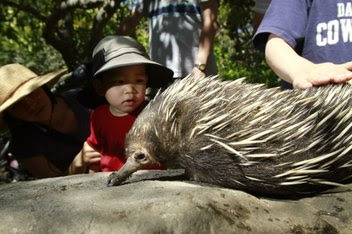 After 13 years in the San Diego Zoo, Eddie the echidna succumbed to an unknown illness at the age of 27, far short of his expected 50-year life span.

Now, researchers are making sure the animal’s death wasn’t in vain.

At the world’s largest genetic testing facility in Beijing, Eddie’s preserved cells are being used to create the first map of an echidna’s biological source code, which could help save the endangered species from extinction.

The work is part of the 10K Genome Project, an ambitious global effort to sequence the genes of 10,000 different kinds of vertebrae — mammals, birds, reptiles, amphibians and fishes — by 2015.
Posted by RR at 21:27