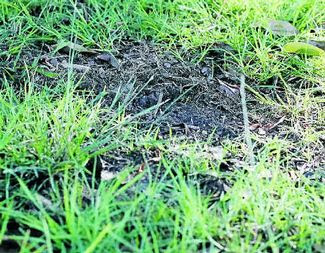 Jeez, we put up a post about what Yowies look like and, bugger me, a Yowie sighting surfaces!

And now to the sighting...courtesy of the Daily Examiner. The above picture is a blurry track found near the scene - is it a Yowie or perhaps just a big foot?

If your answer was “that guy down at the local,” you're probably right but it's also a common description of a mythical Australian creature known as a yowie, a specimen of which has been reportedly spotted near Centenary Dr, north of Grafton.

A Hunter Valley man named Dean, who did not wish to be identified further, thinks he may have caught a glimpse of one of the creatures, a kind of an Australian version of Bigfoot, as he was driving along the section of road in the early hours of Tuesday morning.

Dean, whose work sees him driving more than 5000km a week around NSW, was travelling south along the Pacific Hwy, north of Grafton just before 2.30am when he took the Centenary Dr bypass. Shortly after turning into the road he saw something that shook him to the core.

“I reached the top of the hill and I was coming around the sweeping corner to the right when I noticed something a lot larger than a kangaroo in the middle of the road – my headlights weren't on it yet but it was a bright night and I saw what looked like a large person stooped over, with a big overcoat on,” Dean said.

“At the time I thought ‘you silly old thing, what are you doing in the middle of the road at this time of the morning', but next thing I knew my headlights started to light it up and it took one giant step off the road, it went from standing up like a person to going down on all fours and then it disappeared into the scrub in about three bounds.”

Dean, who is used to night-driving and fatigue management, slowed down and was looking into the scrub for the creature and said he saw it silhouetted against the sky.

“It had an almost sort of a square, shaggy block head sitting straight on its shoulders – I'm a pretty big guy but it made me absolutely awe-struck how huge its body was – it had its arm up against a tree and it had about a foot of hair hanging from under its biceps.”

He estimated the creature to be at least two metres tall and covered in what looked like jet-black hair.

Dean said he had no idea what to think until he described the incident to colleagues later who said it was similar to yowie-sighting stories they'd heard in their travels.

Since then Dean said he had been researching ... to rationally explain what he saw but has yet to find a satisfactory answer.

“Anybody who knows me knows I'm the ultimate realist but this was an awe-inspiring moment, it's definitely made me a believer,” Dean said.

During his search for answers however, Dean came across the website of Australian yowie researcher, Paul Cropper who was very interested in his story.

“In our book we recorded around 350 reports going back to the late 1700s, early 1800s, but I imagine there's a lot more than that which don't ever reach the media – people have these experiences and then just keep it to themselves,” Mr Cropper said.

Theories abound as to what yowies could be, including an unknown species of ape or even an undiscovered close relative to homo sapiens, he said.

“One thing you can say with absolute certainty is that Aborigines and Europeans have been recording these things for a long time – the Aboriginal stories go back to the Dreamtime and the European stories go back to basically the first settlement ... there's just this consistent thread of stories up until Tuesday morning,” he said.

Anyone in the Clarence Valley who has had a similar experience can contact Mr Cropper, in confidence, via email on yowie99@gmail.com
Posted by RR at 19:11