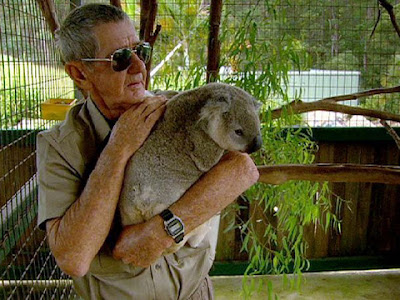 We're a wee bit late reporting this, but Australian wildlife campaigner Bob Irwin was arrested at a protest recently.

The father of the late 'Crocodile Hunter' Steve, and the man who taught the icon everything he knew about crocs, was fighting against the coal seam gas industry in southern Queensland.

According to AAP, landholders and environmentalists have been protesting at the Tara Estate since last month to try and stop a state energy company from building a 16km pipeline to take coal seam gas from five wells on the estate to a nearby plant.

It is believed that the move will be risky for human health, contaminate water and cause land values to drop.

Queensland MO Aidan McLindon confirmed that Bob Irwin was taken to Chinchilla police station to be interviewed by detectives.

The Sydney Morning Herald reports that he has since been released and charged with ignoring police orders to remove himself from a road blockade.