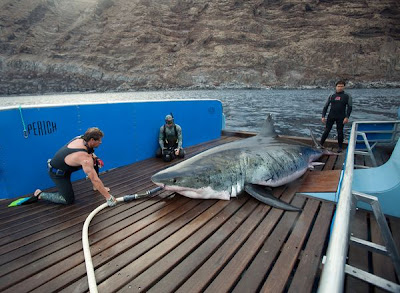 Megalodon's son? Jaws' half brother? Either way this is one big fish!

An expedition crew hauled up—and released— this whopping great white shark back in 2009.

The impressive looking predator breaks the team's previous record of 16.8 feet (5.1 meters), set when they caught a female great white named Kimel. (It should be noted both records are unofficial and not maintained by a formal organisation.)

The new titleholder was named Apache after the dog of Brett McBride, boat captain on the National Geographic Channel show Shark Men.

Shark Men chronicles the work of scientists and fishers who catch and release great whites in an effort to figure out where the mysterious giants breed and give birth. The scientific team is led by Michael Domeier, president and executive director of the Marine Conservation Science Institute.

"He was all scarred up and had big marks all over him—you could tell he was just a bad-ass shark," Expedition leader Chris Fischer said.

"It was so impressive and so humbling to be near him."


Great whites are common in Australian waters and several fatalities have been recorded as a result of encounters with these killing machines of the sea.
Posted by RR at 08:19