Banjo the koala's back where he belongs 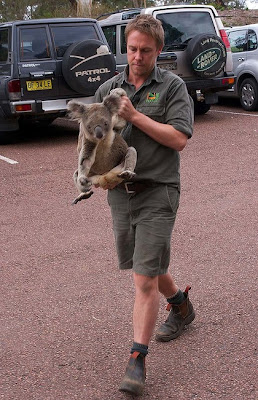 We can't think of a lower act than stealing a zoo animal from its enclosure. Many people fail to understand that most of these animals have lived their entire life in captivity and survive on highly specialised diets. They are not pets, nor do they take kindly to being manhandled, bundled into boxes or sacks and being taken from their familiar surroundings - or being stuffed into garbage bins.


~~~~~~~
An elderly koala stolen from an Australian wildlife park by bolt-cutter wielding thieves was returned home unscathed, with an anonymous phone tip-off leading keepers to a rubbish bin in the zoo's parking lot.

'Banjo' the koala went missing earlier in the week after the koala-nappers used the cutters to break into his enclosure at the Australian Reptile Park in Somersby, two hours north of Sydney.

His disappearance, which keepers said was the first koala theft from an Australian zoo, prompted fears for his safety since at 13 he was advanced in years, and being fed special daily supplements of vitamins and minerals in addition to his regular diet of eucalyptus leaves.

But Wednesday night, following the phone call, the park found him in a plastic rubbish bin covered with a milk crate, appearing frightened and mildly dehydrated but otherwise fine.

Keepers will have to administer fluids to Banjo, noted for being a fussy eater, in order to bring him back to health.

"It's good to have him back," said park manager Tim Faulkner, who said he wouldn't have lasted long outside.

"People can't care for this sort of thing. It's not a dog."

Koalas, a marsupial native to Australia, typically live 10 years in the wild and around 15 years in captivity. Some 100,000 are estimated to be left in the wild, with their natural habitats under threat from urbanization.
Posted by RR at 18:40