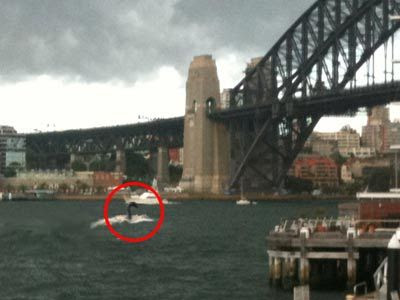 You have to love April Fools' Day...

This offering from the folk over at Yahoo got a couple of people excited (really) - they couldn't seem to tell the picture was a fake :-)


----
Sydney residents were left in fear after a 'Nessie-like' creature appeared in the waters near the Harbour Bridge, according to eyewitness accounts.

Detective superintendent Harvey Edison said that many local police station phone-lines were jammed from 6pm until late last night due to the large number of calls describing a "strange creature emerging from the waters".

Mr Edison revealed that the reports initially came from people on cruises, ferries and boats on Sydney Harbour. "At first we dismissed the calls as a hoax since most of them were made by people on party cruises who were obviously inebriated."

Nonetheless, more eyewitness reports, photos and even videos soon made their way to various Police stations. "This is not the first time we’ve received reports of strange sightings in Sydney Harbour," Mr Edison admitted.

"But, before yesterday, they’ve always turned out to be false."

According to the detective superintendent, usually these sightings are nothing but "prank calls" aimed at having a laugh at the expense of the NSW police. "We’ve heard it all: from a shiver of vicious great white sharks, to a giant octopus. But never before had we received as many calls reporting the same incident as yesterday."

Mr. Edison said that all the videos and photos received are currently being evaluated by a team of experts to determine if they’re real or fake. Although he admitted that it was hard to believe that that much evidence "could have been fabricated in such a short period of time."

When questioned about the possibility of such a creature, prominent Icelandic marine biologist Tsüj Gniddik, who has spent most of his career studying unusual marine specimens, said that people shouldn’t be surprised if more of these sightings start happening all around the world.

"As of late, the quantity of natural phenomena has increased dramatically," Mr. Gniddik said. "Most of this activity happens underwater, at very deep levels, and is rarely felt on the surface.

"These natural phenomena have created several cracks in the ocean floor, which serve as openings to unexplored areas. We have very little understanding of the fauna that resides in these places, as most of them have been cut off from the top level of the ocean for centuries and even millennia.

"If you analyse most sightings of ‘mythical’ sea creatures throughout the years, it is usually a small group or a single individual who claim to have seen them, making these incidents almost impossible to prove.

"The Sydney Harbour sea-creature is the first recorded incident of this kind where the same ‘creature’ was spotted by hundreds of people at the same time and at the same location, which makes it particularly significant."

According to an official statement, a team of experts – which includes world-famous biologists and divers – will soon arrive in Sydney to investigate the sightings.

In response to the reports, NSW police have cancelled all ferry and party cruise services until further notice, and asked people to refrain from sailing or using luxury boats on Sydney Harbour.

The announcement has elicited a plethora of negative reactions from people who were planning on celebrating April Fools’ Day aboard one of Sydney’s popular party cruises.
Posted by RR at 16:34