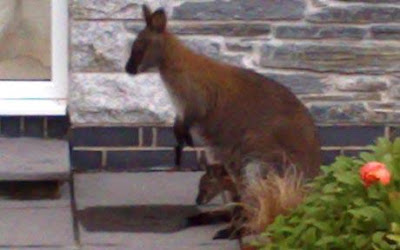 The UK's Telegraph newspaper has reported the discovery of an OOPA - out-of-place-animal - in Cornwall, in the country's west.

Homeowner Brian Nash, 39, provided the best possible proof of his claims that a wallaby was on the loose with a photograph of a mother macropod hopping around a neighbour's lawn with her joey tucked into her pouch.

It is believe the female mated with a male which escaped from a nearby farm in 2007 but was never re-captured. Experts say wallabies are "renowned" for being able to find each other in the wild and it is thought the pair have begun breeding.

The male escaped two years ago from Trevathan Farm near St Endellion.

Owner Mark Symons said: "We lost a male wallaby two years ago and wondered what happened to him. They are very tough creatures and will certainly still be alive.

"He is a healthy boy and will eat anything and would be more than capable of surviving for years yet.

"The chances are he found a mate, a female that also escaped from somewhere."
Posted by RR at 20:21