Sumatra's Short Man of the Forest 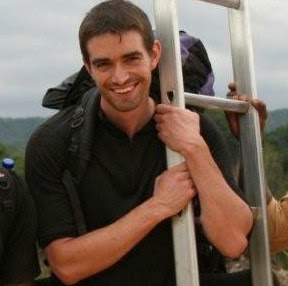 We finally finished watching Murray Collins' Short Man of the Forest, which was released in 2004, but only arrived in the mail this week (and no, we didn't order it seven years ago, we only just managed to track down a copy!).

It was interesting watching the documentary, in which Collins goes in search of the Orang Pendek, for many reasons, but you can't help but be struck by the thought that the folk over at Nat Geo's Beast Hunter used his doco as a template for a recent episode of their Beast Hunter franchise.

Collins, a Brit fluent in the local lingo (a big plus), talks to researchers and witnesses - most of whom reprise their interviews in the much later 2010 Beast Hunter episode (Debbie Martyr, Jeremy Holden, and local farmers and guides) - and treks through the jungle to Lake Gunung Tuju (aka the Lake of Seven Peaks), as Pat Spain later does. Collins and Spain visit the (same?) market and ask if anyone has seen the 'short man' (and get the same hilarious reaction). They even visit the same local shaman!

If you want to be bald about it, it looks like the Beast Hunter crew has pretty much lifted Collins' trip template and used a new front man to spice up the format, which is kind of disappointing. OK, you could argue there are precious few people to interview, and experiences to have, but really...

What's great about Short Man of the Forest though is that it features as its protagonist a fluent Indonesian-speaking primatologist who approaches the subject with the kind of open, enquiring mind that draws in the viewer. You could same the same of biologist Spain, but Collins conveys a genuine earnestness in his quest and the documentary comes off less boy's own adventure and more scientific quest, which is surely the point.

A close encounter with a tiger and a snake doesn't put Murray off, and he has some thoughtful reflections on what the creature could be (is the tiger's deep throaty roar a part of the mythology?), and attempts to deconstruct some of the problems with the Orang Pendek story.

For Orang Pendek fans, it certainly doesn't hurt to watch both, but you will find that while six or seven years elapse between filming, not much else happens, which is a shame in the case of the Beast Hunter episode as so much has happened since the early 2000s it seems almost criminal to have overlooked it.
Posted by RR at 21:57