Lair of the Cane Toad Discovered 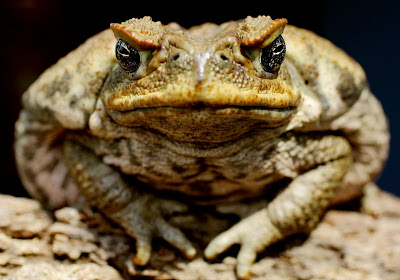 Sydney scientists have tracked down the first known breeding spot for one of our most invasive pest species, the Cane Toad.

The Sydney University researchers used technology to help their quarry to its main lair - a pond in an industrial park in the Sutherland Shire, in Sydney's south.

Scientists used radio transmitters attached to the backs of cane toads to follow the movements of the nomadic toads.

And in heartening news in the fight against the spread of the amphibians, scientists believe they have stopped the pests from gaining a foot-hold in the city.

A cane toad researcher from the University of Sydney, Rick Shine, said the program was a terrific example of a co-ordinated attack on a potentially serious problem.
Posted by RR at 20:18